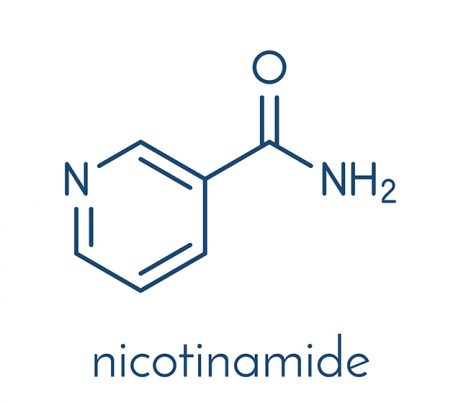 Nicotinamide has a whitish color. It is very soluble in 95 percent ethanol. It is also soluble in ethylene glycol, ether, benzene, acetone, amyl alcohol, butanol, and chloroform. It emits toxic fumes of nitrogen oxides when heated to decomposition.

Nicotinamide is the active form of niacin or vitamin B3 and is used as treatment for a whole slew of health conditions. Nicotinamide therapy provides the most effective results if it is applied within three hours of ingestion of a poisonous substance.

Oral nicotinamide can be obtained at 20 to 30 milligrams in multivitamin combinations, and on its own as 500-mg tablets. It is also the base ingredient in cosmetic products and topical agents including sunscreens.

Nicotinamide’s purported benefits are so much so that they offset potential risks; having said so, pregnant women are allowed to take them. They should be warned, however, that nicotinamide does cause some slight adverse effects, such as sweating, headache, flushing, gastrointestinal symptoms, dizziness, and fatigue. More severe negative effects include jaundice and liver damage. 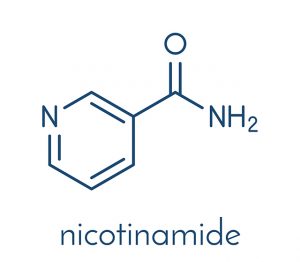 Nicotinamide acts as a chemo- and radio-sensitizing agent by increasing tumor blood flow, thereby decreasing instances of tumor hypoxia, or when tumor cells have been deprived of oxygen. It also inhibits poly (adenosine diphosphate) polymerases, which are enzymes that contribute to the rejoining of deoxyribonucleic acid (DNA) strand breaks stimulated by chemotherapy or radiation.

Nicotinamide provides great beneficial effects for the skin; in fact, it is said to treat inflammatory skin disorders, such as acne and rosacea, a skin condition that causes facial redness and dilated blood vessels in the face. It does so by reducing sebum levels in your face.

It also provides skin with a radiant glow by improving complexion and pigmentation and ridding of blotches and redness. Nicotinamide can be purchased in the market by its trade name Nicomide, and is available as an over-the-counter treatment for acne in New Zealand, Australia, Canada, Ireland, the United Kingdom, and the United States.

Nicotinamide can address the issue of lack of vitamin B3, which is known as pellagra and is manifested by dementia, diarrhea, an inflamed skin, and sores in the mouth, and which can cause premature death.

Nicotinamide is good for the nervous system. It prevents neurologic toxicity. It provides acute neuroprotection and reduces edema or swelling of the brain after traumatic brain injury.

Nicotinamide is good for the endocrine system. It strengthens organs belonging to it and guards it against possible infection.

Nicotinamide is good for the immune system. It can potentially hinder ultraviolet-induced immune suppression and enhance the repair of direct and oxidative DNA damage in human keratinocytes.

Nicotinamide is good for the nervous, endocrine, and immune systems.

Nicotinamide is good for the skin.