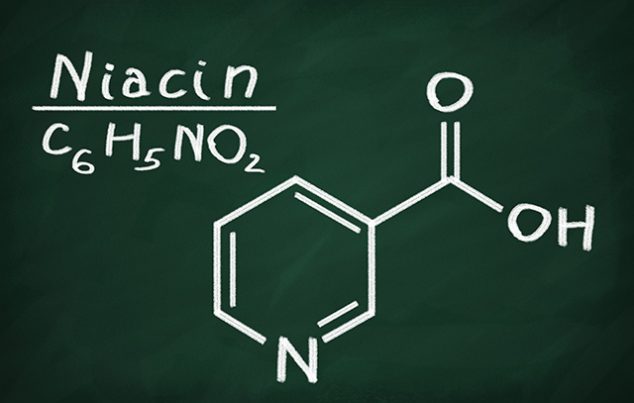 Niacin is a vitamin B which the body needs to keep cells functioning properly.

It is a colorless, water-soluble derivative of pyridine. It is involved in energy metabolism as it is part of the process of reducing or oxidizing coenzymes and metabolizing amino acids, and is also used in detoxification reactions for drugs and other substances.

Niacin has other forms such as nicotinic acid (pyridine-3-carboxylic acid) and nicotinamide (nicotinic acid amide). There are other derivatives that also show the biological activity of nicotinamide including inositol hexanicotinate.

NAD is also needed for DNA synthesis and has a role in giving proteins the chemical components they need.

If the body lacks niacin, it can get sick of pellagra, a disease that would strike people who ate a diet consisting almost entirely of corn products. It causes symptoms such as cracked and scaly skin, dementia, diarrhea, inflamed mucous membranes, skin sores, weakness, irritability, and mental delusions. It also causes burning in the mouth and a swollen, bright red tongue.

The best food sources of vitamin B3 are beets, brewer’s yeast, beef liver, beef kidney, fish, salmon, swordfish, tuna, sunflower seeds, and peanuts. It can also be found in breads and cereals. Even tryptophan-rich foods such as poultry, red meat, eggs, and dairy products can boost niacin levels. 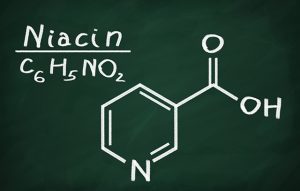 One of the medicinal uses of niacin is that it can lower cholesterol levels. It has been used since the 1950s to lower elevated LDL (bad) cholesterol and triglyceride (fat) levels in the blood. A person should not take high doses of niacin without a doctor’s supervision as it can cause flushing of the skin, upset stomach, headache, dizziness, blurred vision, and an increased risk of liver damage.

Niacin taken along with colestipol can also help slow down the progression of atherosclerosis and lessen heart attacks and death, according to one study.

People with heart disease and high cholesterol who took niacin along with simvastatin had a lower risk of having a heart attack or stroke and it reduces the risk of death, according to another study.

Niacin has also been found to be good for people with diabetes. Niacinamide may help protect the cells in the pancreas that make insulin for a time, although more research into this matter is needed.

A preliminary study suggested that niacinamide may improve arthritis symptoms by increasing joint mobility and reducing the amount of non-steroidal anti-inflammatory drugs needed to counter the disorder.

People who get higher levels of niacin in their diet had a lower risk of Alzheimer’s disease and cataracts, according to different population studies.

Vitamin B3 has a lot of health benefits. One of these is it is good for the digestive system. As a part of the B-complex vitamins, it helps in the normal functioning of the human digestive system, as it promotes a healthy appetite, properly-functioning nerves, and a glowing skin.

It is also good for the cardiovascular system. Intakes of large quantities of niacin, around 1100 milligrams or more in a day, has been proven to considerably reduce the levels of bad cholesterol and raise the levels of good cholesterol in the body, which prevents the narrowing of artery walls and diseases like atherosclerosis.

Because it is water-soluble, it can travel through the human bloodstream and the body has the option to discharge excess vitamins through the process of urination.

Niacin was found to benefit the reproductive system. It helps in creating sex hormones for people suffering from sexual disorders like impotence and erectile dysfunction.

This vitamin also provides energy as it performs the important function of converting proteins, carbohydrates, and fats into energy.

Vitamin B3 is beneficial to the nervous system. With the administration of niacin supplements, the mental health of a person can be improved.

Niacin, also known as vitamin B3, is a water-soluble vitamin that helps prevent impotence, diabetes, and high cholesterol levels.

It also benefits the skin, heart, and the brain.