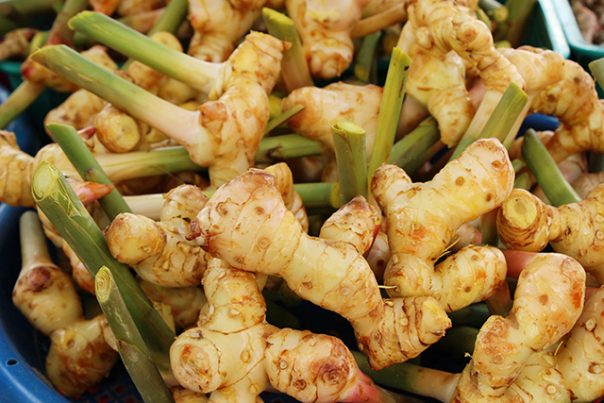 Galangal, which has the scientific name of Alpinia officinarum, has been called by many names, including galanga, galingale, gargaut, colic root, east India catarrh root, east India root, ginger root, India root, Thai ginger, or blue ginger. In traditional Chinese medicine, dried galangal root is called gao liang jiang. It is a member of the ginger family of Zingiberaceae.

Galangal is a tropical perennial shrub that is native to Thailand, Southeast China, Vietnam, and Indonesia but now is cultivated at a commercial scale in Malaysia, Thailand, the whole of China, India, and Australia. It has a close connection with ginger (Zingiber officinale) and Siamese ginger, which is also known as aromatic ginger, or resurrection lily. Galangal favors wet environments like tropical rainforests, grow the whole year round, and should be harvested a year after it is planted.

Galangal fruits look like berries and are usually the size of a pea with dark brown seeds. They don’t taste good. The herb, or the leaves, on the other hand, has a slightly aromatic and spicy flavor. The roots, which are reddish-brown in color, also have an aromatic flavor and can be used to add flavor to beverages.

Galangal had its origins way back before 1,000 A.D. in China. During the 11th and 12th centuries, a German philosopher and medieval Christian mystic called Hildegard of Bingen, who utilized galangal root as a remedy for various types of illnesses, referred to it as “the spice of life”. 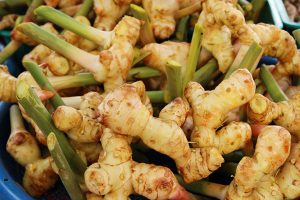 Galangal root has analgesic (pain relief), antipyretic (fever reduction), antibacterial, antifungal, antispasmodic, antioxidant, anti-inflammatory, and cancer-fighting properties. As a matter of fact, it inhibits the development of many pathogenic bacteria such as Bacillus anthracis, various strains of staphylococcus, hemolytic streptococcus, Helico pylori, and Vibrio, which impacts under-cooked shellfish like oysters.

Among the cancers that galangal root is purported to alleviate include gastric, pancreatic, liver, bile duct, colon, and breast cancer, and leukemia, and melanoma. Also, in the Middle East, galangal root is used to relieve the pain brought about by rheumatism and arthritis.

Have you ever found yourself getting annoyed because of a hiccup that you just can’t get rid of? Clear the hiccups away by using galangal root. Combine it with poor man’s ginseng (Codonopsis pilosula) and the fungi fu-ling, which is also known as Indian bread (Wolfiporia extensa), for best results.

Galangal root is good for the digestive system and all the processes that are related to eating and food digestion. It can be a good treatment for anorexia nervosa as it induces appetite and digestive fluid production. It also used to address digestion issues such as dyspepsia, stomach ache, diarrhea, vomiting, and colic, which is abdominal pain caused by intestinal gas or obstruction in the intestines.

Galangal root is good for the nervous system. It contains a compound called 1’-acetoxychavicol acetate (ACA), which can lessen the risks of age-related cognitive degeneration. It also inhibits TNF-alpha activity, which causes depression.

Ways to use galangal root

Galangal root is a prized favorite in Indonesian cuisine. It is a main ingredient in the Indonesian national dish nasi goreng, which is a rice dish cooked altogether with gravy, meat, mushrooms, and vegetables. It is also big in Thai dishes, and is a staple in tom yum, which is a slightly spicy soup with chicken and lemongrass, and tom ka gai, which is a citrusy and earthy soup that doesn’t leave you with a lasting burning sensation in your mouth.

Galangal root is impressive at fighting certain cancers such as gastric, pancreatic, liver, bile duct, colon, and breast cancer, and leukemia, and melanoma.