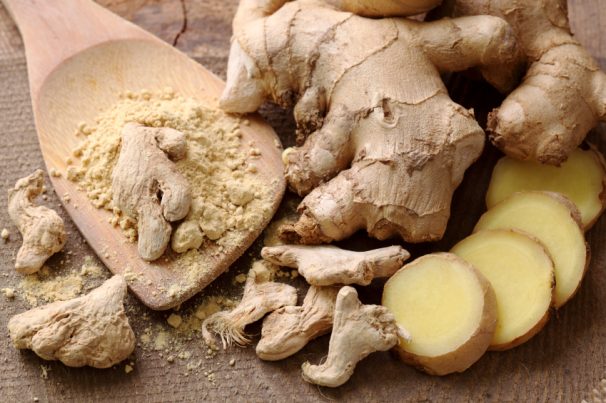 Ginger is the horn-shaped root of the ginger plant with a distinct aroma and pungent flavor that most people know it for. It is native to southeast Asia, according to WHFoods.com, and has been used in ancient Asian cuisine, and traditional medicine. Ginger root has dull brown skin that varies in thickness, depending on the age of the root at harvest. Depending on the variety, the flesh of the ginger root is either yellow, white, or red, with a stringy texture and a strong, uniquely spicy taste. Ginger is also available in powdered or tea form.

It is mainly produced today in Jamaica, India, Fiji, Indonesia, and Australia. 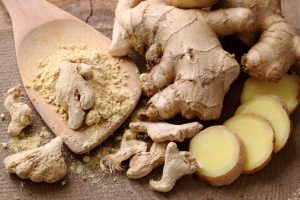 Generations of people have been using ginger as natural medicine, because of the root’s robust nutrition profile, as well as its strong, soothing flavor. The spice is one of the oldest remedies in the world according to OrganicFacts.net, and can be used in various applications.

Ginger is known to relieve nausea, particularly in pregnant women and cancer patients who are undergoing chemotherapy. It is effective because it can be absorbed quickly by the body, and quickly return the body to its normal functions.

It can also be used to relieve pain from osteoarthritis, due to compounds called gingerols that act to suppress inflammatory compounds before they have any effect on the body. Overall, ginger’s anti-inflammatory properties are ideal for maintaining healthy bones and joints.

Gingerols have also been found to inhibit carcinogens in the colon, thereby preventing colorectal cancer. Some studies also show promising links between gingerols and the reduction of tumors and cancerous cells in the ovaries.

Ginger is also a known natural remedy for diarrhea, having the ability to counter stomach spasms and eliminate gases that cause the bowel disruption. As a carminative, it can also relieve flatulence by helping the body release gas and prevent it from building up  again in the stomach. It is good for the digestive system in general, containing compounds that make it easier for the body to absorb nutrients from food. It can also help regulate high sugar levels that may interfere with digestion.

The spice also promotes detoxification by inducing a light sweat in those who consume it. Sweating is one of the ways that the body releases toxins. Additionally, sweat has been found to have dermicidin, which fights germs and reduces bacterial and viral infections.

Ginger is an effective remedy for menstrual pain, as it helps reduce the hormone prostaglandin, which contributes to menstrual cramps in women. Prostaglandin also induces fever and headaches, making ginger efficient against these symptoms as well.

It is great for providing relief from flu symptoms. Its flavor has a soothing effect on sore throats, and stuffy chests.

Ginger may also help with:

It is important to note that ginger can stimulate the release of bile from the gall bladder. Those who suffer from gall stones or have a gall bladder condition should ask a doctor before consuming ginger.

Here are the body systems that benefit from ginger, according to MedicalNewsToday.com:

Ways to use ginger

Ginger can be used in a great number of ways. Its strong flavor stands out on its own, and those who use it for medicinal purposes often take ginger plainly, as a tea, or a chew. Those who want to incorporate more ginger into their diet can try various recipes that build on the root’s unique flavor. Recipes on BBCGoodFood.com show that ginger can be incorporated in savory dishes such as stews, hot salads, and stir-fried dishes, going especially well with meat because it adds a flavorful punch. Ginger also works in sweet dishes, such as cake and flapjacks. Ginger can even be used to flavor home-brewed beer.

It can also relieve joint pain and promote healthy bones.

Ginger is an efficient diarrhea remedy and can also be used to treat flatulence.

It is a known treatment for the flu and colds.

It can provide relief from menstrual pain.

Ginger is linked to the prevention of colon cancer.