Visceral larva migrans – causes, side effects and treatments at NaturalPedia.com 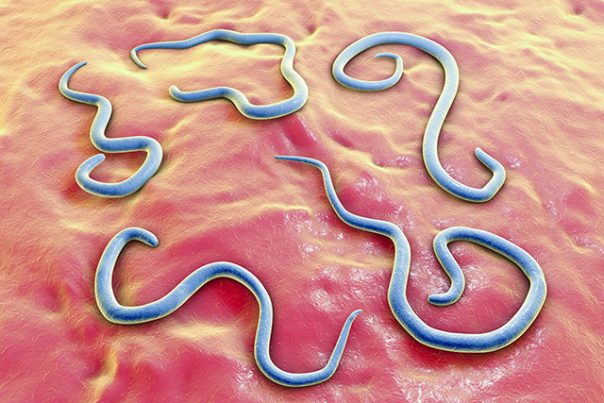 Visceral larva migrans (VLM), also known as systemic toxocariasis, is an infection in humans caused by parasitic roundworms — Toxocara canis and T. cati — that are usually found in the intestines of dogs and cats.

Eggs from the worms pass into the feces of dogs and cats and can contaminate areas around the home where kids play. The eggs can be accidentally ingested, especially by children who put things in their mouths and don’t often wash their hands.

Adults can become infected if they work with dirt and accidentally ingest dirt containing Toxocara eggs.

Infection can also occur from ingestion of undercooked or raw meat/poultry, albeit rare.

The symptoms of VLM may depend on the number and specific location of roundworm larvae present in a person’s body system.

VLM may also affect the eyes, causing impaired vision, swelling around the eyes, or a cross-eyed appearance. Untreated VLM can damage the retina.

If left untreated, or with delayed treatment, VLM can lead to some complications, such as:

Food items or nutrients that may prevent visceral larva migrans

The following foods and nutrients contain compounds that effectively get rid of parasites and help treat infections:

In most people with VLM, the infection resolves on its own, and treatment is unnecessary. In severe cases, treatment mainly involves the use of anthelmintic drugs such as albendazole or mebendazole plus corticosteroids, but surgery may be required to physically remove larvae from the affected organs or tissues.

VLM may be prevented by de-worming dogs and cats and training them to defecate in designated areas, instead of public places where most people and children are exposed. Covering sandboxes when not in use prevents animals from defecating in them.

It’s best to discourage children from eating non-foods, such as soil and clay, and other things that have been exposed to dirt that may be contaminated with parasites.

DO NOT eat raw liver from a chicken, lamb, or cow.

Occasionally, laser photocoagulation (application of an intense beam of light) is used to kill larvae in the eyes.

Visceral larva migrans (VLM), also known as systemic toxocariasis, is an infection transmitted from animals to humans. It is caused by parasitic roundworms found in the intestines of dogs and cats.

The parasites pass into the feces of dogs and cats and contaminate areas where the animals defecate, mostly around places where children play. The eggs can be accidentally ingested, especially by children who touched dirt and put things into their mouths without washing their hands.

Although rare, infections can also occur from ingestion of undercooked or raw meat/poultry.