Ulcers – causes, side effects and treatments at NaturalPedia.com 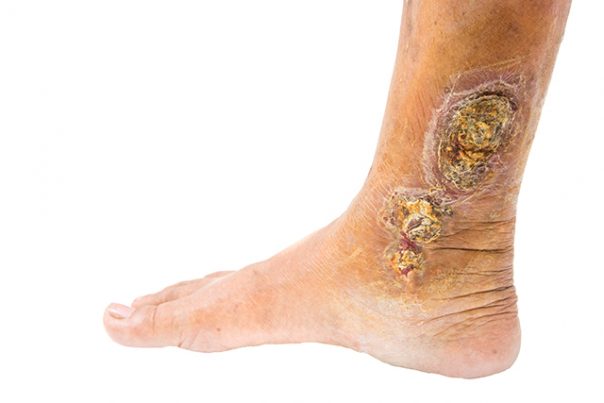 The word “ulcer” refers to lesions or sores that occur because of a gradual disintegration of the surface epithelial tissue, that is, cells that form the lining of major organs.

While the term is usually associated with those that occur on the lining of the stomach and the small intestine (peptic ulcers), these can occur on the skin and the mucous membrane.

The physical characteristics of an ulcer may vary: These can either be superficial or extend to the deeper layers of the skin, including the underlying tissue. For the most part, however, an ulcer has a depressed floor surrounded by sharply defined, raised crusts. The main symptom of an ulcer is pain. 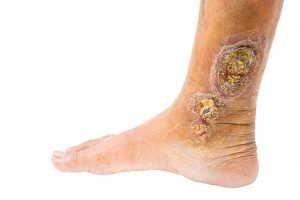 Peptic ulcers, also known as stomach ulcers, develop in the lining of the stomach or the top portion of the small intestine (duodenum). In rare cases, these can occur in the esophagus. This type of ulcer is usually caused by long-term use of nonsteroidal anti-inflammatory drugs (NSAIDs), Helicobacter pylori infection, and, in rare cases, tumors in the stomach, duodenum, and pancreas called  Zollinger-Ellison syndrome (ZES).

The main symptom of a peptic ulcer is the presence of a dull or burning pain in the stomach. It often occurs when the stomach is empty and can last anywhere from a few minutes to hours.

Canker sores occur inside the mouth, in particular, on the inside of the lips and cheeks or underneath the tongue, as well as on the genitalia. The main cause of canker sores is unclear, but factors such as stress, lack of sleep, and nutritional deficiencies seem to be linked to outbreaks. The ulcer could also be a symptom of an underlying condition such as herpes simplex, herpangina, and erythema multiforme.

The ulcer starts as a round yellowish elevated spot that is surrounded by a red halo. It then progresses to become a punched-out ulcer, which is painful especially while talking or eating.

Diabetic foot ulcers occur in at least 15 percent of people with diabetes. This type of ulcer is located at the sole of the foot, and it is caused by a combination of factors, including poor blood circulation, foot deformity, irritation, and trauma. People who have had diabetes for a long time also risk developing nerve damage, which can also lead to the development of foot ulcers.

Most people who develop a foot ulcer do not feel pain – mainly because of nerve damage. However, drainage may be present in the affected area, as well as redness and swelling. If the condition has progressed significantly, a distinct odor may be present.

Venous ulcers happen when the veins in the legs are unable to push blood back up to the heart. This leads to a build-up in the veins, which can cause open sores to form because of increased pressure and excess fluid.

This type of ulcer, which occurs on the leg, are slow to heal.

Bedsores, also known as pressure sores, occur when a person stays in one position for extended periods. These form when in areas where the bones are close to the skin like the ankles, back, elbows, heels, and hips. The condition is seen in people who are bedridden, frequently use a wheelchair or those who are unable to change positions.

This type of ulcer can bring about infection, with some even life-threatening.

Ulcers can occur in the skin and areas where epithelial cells are present such as the mucous membranes. If an ulcer does not heal or is hard to the touch, this could indicate the presence of a chronic condition such as cancer.

One type of cancer, called a fungating tumor, occurs when an underlying tumor under the skin breaks through the skin’s surface and forms into ulcers.

Food items or nutrients that may prevent ulcers

The consumption of certain food items can help relieve, or even prevent, ulcers – in particular, peptic ulcers. These include:

Some natural treatments for ulcers include the following:

For skin ulcers, regardless of which type of ulcer you have, a good rule of thumb is to clean the affected area by gently bathing it with warm water and mild soap. Making a topical paste using ground comfrey root powder and aloe vera gel, and applying it to the affected area could help speed up the healing process. In venous ulcers, wearing compression stockings or ace bandages can help restore normal circulation. Patients with diabetic foot ulcers would do well to consult with their healthcare provider once it is seen.

Ulcers are lesions or sores that occur because of a gradual disintegration of the surface epithelial tissue.

Ulcers can occur on the skin and the mucous membrane.

Ulcers can vary: These can either be superficial or extend to the deeper layers of the skin, including the underlying tissue.