Tuberculosis – causes, side effects and treatments at NaturalPedia.com

Tuberculosis (TB) is a known lung disease caused by a bacterium called Mycobacterium tuberculosis.  It is curable and preventable, however, since it can easily be transmitted from person to person, may fall victim to the disease. A person needs only to inhale a few of the TB germs become infected.

According to the World Health Organization, tuberculosis is among the top 10 causes of death globally. In fact, in 2016, around 1.7 million people died from it while over 10.4 million were diagnosed with the condition.

TB has two types and these are: 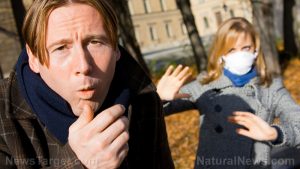 Tuberculosis can victimize anyone of all ages. However, it is said to be more prevalent among adults and in less progressive countries. Those who are positive for HIV are 20 to 30 times more vulnerable to the bacteria, and so does other people who are suffering from other health condition. In addition, smokers are also at a higher risk of developing TB.

Meanwhile, the following are symptoms associated with tuberculosis:

If tuberculosis is left untreated, it can be fatal. And while the Mycobacterium tuberculosis bacteria mainly affects the lungs, it is possible for the infection to spread out and affect other parts of the body. This can cause further complications, such as:

Food items or nutrients that may prevent tuberculosis

There’s a bunch of food people can take to prevent or relieve the symptoms of tuberculosis. Some of them are as follows:

To treat tuberculosis, medical experts often prescribe products that can kill the TB-causing bacteria. However, there are home remedies which can be done as a safer alternative, such as:

Tuberculosis is a common lung infection caused by the Mycobacterium tuberculosis bacteria. It is tagged as one of the top causes of death worldwide as it can be easily transmitted from person to person.

While anyone can contract the disease, adults are said to be more susceptible to it and so are people diagnosed with HIV. TB cases are also more prevalent in developing countries and among people who smoke.

Symptoms of TB include fever, chills, and night sweats, coughing, coughing with blood, decrease or loss of appetite, weight and/or muscle loss, fatigue or malaise, pain in the chest while breathing, shortness of breath, swollen lymph nodes, and pneumonitis.

Further complications may be caused by this condition, such as spinal pain, joint damage, meningitis, liver or kidney problems, and heart disorders. If left untreated, TB can also be fatal.