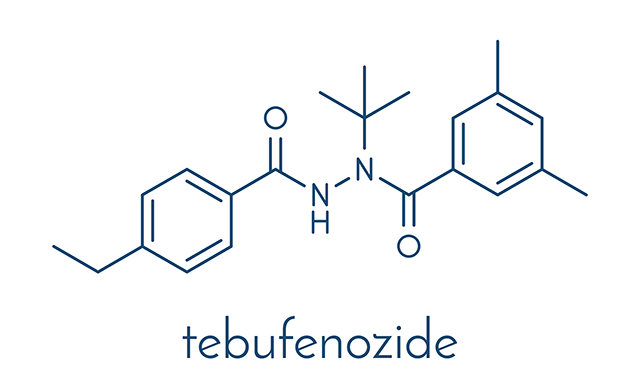 Tebufenozide is an insecticide that is soluble in fat. It is an off-white liquid insecticide used to control pests, particularly Lepidoptera pests, in fruits, vegetables, and other crops. This chemical imitates the action of the insect molting hormone known as ecdysone. It causes premature molting in larvae. Other pests that can be controlled by tebufenozide include grape berry moth, codling moth, European grapevine moth, grape leafroller, vine moth, and apple brown tortrix moth. Tebufenozide has the chemical formula of C22H28N2O2. 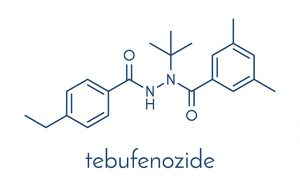 According to an entry by PesticideInfo.org, tebufenozide can cause harmful effects in the environment as water that is contaminated with this insecticide can possibly affect the quality of water and its physical properties. Moreover, this insecticide is considered very toxic to aquatic organisms.

There are a few body systems that tebufenozide can cause. One of these is the ocular system, particularly the eyes, as it may result to slight temporary eye irritation. Any other body system or organ that has been exposed to the chemical for a long time or multiple times can be damaged.

Items that can contain tebufenozide

Tebufenozide is present in pesticides, particularly insecticides, that are used to accelerate the molting of caterpillar pests. It is an ingredient in insecticide products such as Mimic, Confirm, and Romdan.

The Bartlett.com listed several ways on how to avoid tebufenozide. To avoid the chemical from getting in contact with your face or eyes, using safety glasses or mask is recommended for protection. To avoid skin contact with the chemical, using gloves and protective clothing that are chemically resistant to the insecticide when prolonged or frequently repeated contact could happen. For respiratory protection, it is advisable to maintain the atmospheric levels below the exposure guidelines by providing general or local exhaust ventilation. Using an air-purifying respirator is also a way to avoid inhaling the chemical compound.

Exposure to tebufenozide can result to headache, dizziness, weakness, and nausea.

Tebufenozide can also cause irritations in the eyes, skin, esophagus or gastrointestinal tract and respiratory tract.

Any other body system or organ that has been exposed to the chemical for a long time or multiple times can be damaged.