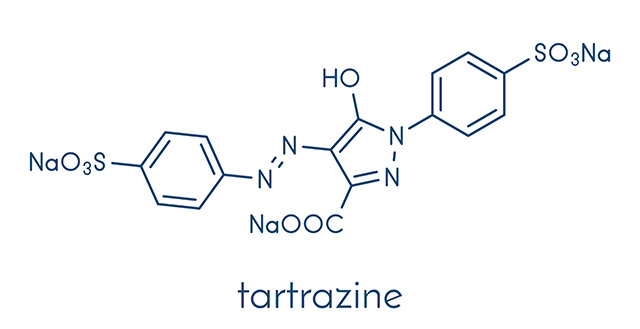 Tartrazine is an azo dye, which is a chemical compound where two hydrocarbon groups are joined by two nitrogen atoms. All dyes that are used in food and textile industries are around 60 to 70 percent azo dyes, because production of azo dyes is inexpensive. Azo dyes are also more stable than most natural food dyes. The compounds used in the production of tartrazine can be extracted from coal tar, which is an asphalt derivative. Tartrazine is used to give foods a bright lemon yellow color. It can also be used together with blue and green dyes to color food different shades of green. The use of this dye is banned in Austria and Norway, yet it is still used freely in the United States. Some European countries have issued warnings about the possible side effects of the dye. 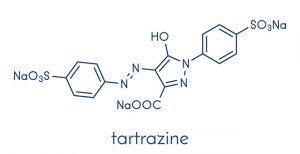 Tartrazine has a few known side effects in humans. It may cause allergic reactions to some people, specifically those with asthma or aspirin intolerance. Its symptoms include hives and swelling of the lips, tongue, throat, and neck. In the United Kingdom, warnings about specific food dyes, which include tartrazine, were issued in 2008 because of their potential side effects. The synthetic food dye was found to cause changes in the behavior of children, such as loss of concentration and hyperactivity, when combined with benzoic acid (E210). In addition, consumption of the dye may result in chromosomal damage, although further research is needed to verify this claim. Tartrazine has also been associated with some other health problems, such as blurred vision, itching, rhinitis, purple skin patches, migraines, fatigue, and anxiety.

Tartrazine affects several body systems. This artificial food dye may cause adverse effects to the integumentary system as it may stimulate allergic skin reactions. It may also be harmful to the respiratory system if inhaled. It may cause allergy, symptoms of asthma, or breathing difficulties.

Items that can contain tartrazine

How to avoid tartrazine

According to an entry in HealthLine.com, one way to avoid food dyes like tartrazine is to carefully check the label of the product you are about to consume. With every product you buy, be very cautious in reading the ingredient list. If you are uncertain whether a food or medicine contains this chemical or not, it is better to contact the manufacturer to verify or just simply avoid it.

Other ways to avoid food dyes, such as tartrazine, is to reduce your consumption of processed foods, as the more highly-processed the food, the more dyes are needed. Picking naturally-colored foods over artificially-colored ones is also another way to avoid consuming tartrazine. Moreover, avoid any ingredient that has a number in its name. Replacing your food and personal hygiene products with dye-free alternatives is also a way to avoid tartrazine.

Tartrazine is an azo dye that is used to give foods and non-food products a bright lemon yellow color. This artificial food coloring is banned in Austria and Norway, but is still used freely in the U.S. Some European countries have issued warnings about the possible side effects of the dye.

Tartrazine can cause allergic reactions to some people, specifically those with asthma or aspirin intolerance, hives, swelling of the lips, tongue, throat, and neck, and loss of concentration and hyperactivity in children.

Tartrazine can harm the skin and respiratory system.