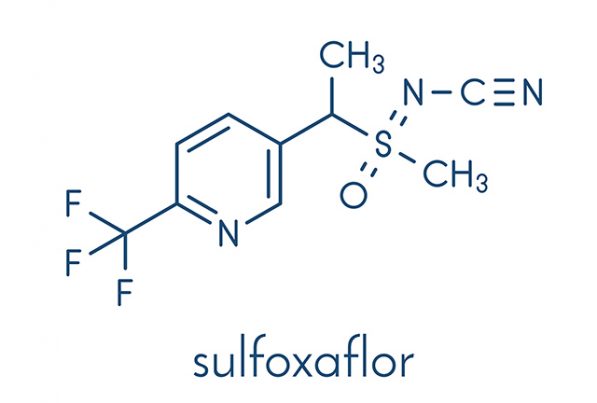 Sulfoxaflor is a systemic insecticide categorized as a sulfilimine, a class of compounds distinguished by its nitrogen-to-sulfur bond. This chemical was developed to be an insecticide that’s both safe for pollinators and dangerous to disease-carrying pests that have developed a resistance to conventional insecticides.

This white, sharp-odored powder has proven effective against crop-destroying aphids. Though approved by the United States Environmental Protection Agency (EPA), sulfoxaflor was linked to the widespread and massive collapse of honeybee colonies. As such, on Sept. 10, 2015, the 9th Circuit Court of Appeals ruled that the EPA had violated federal laws when it approved sulfoxalor without going over the studies regarding its potential impact on honeybee colonies. 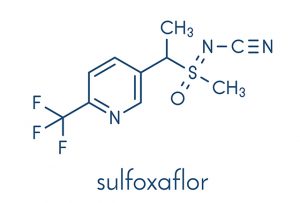 As a sub-class of neonicotinoids, sulfoxaflor has the same effect on bees. Neonicotinoids, a group of insecticides derived from nicotine, are absorbed by plants and can become present in the pollen and nectar harvested by bees. Once absorbed, neonicotinoids can cause the bees to become disoriented and can even reduce these insects’ ability to reproduce. As per a two-year long study that encompassed 33 sites in the United Kingdom, Hungary, and Germany, the agricultural use of neonicotinoids can harm both domesticated and wild bees.

According to the Pesticide Properties Database, sulfoxaflor is toxic to earthworms as well. Moreover, the rapid degradation rate of this chemical means that it has a low leaching potential. However, its tendency to bioaccumulate means that sulfoxaflor is moderately toxic to birds and mammals, yet is of low toxicity to the majority of aquatic organisms.

The health effects of sulfoxaflor on humans have varied. The immediate impact of sulfoxaflor exposure is eye irritation, although corneal injury has been deemed unlikely. The ruling on this chemical’s more serious health effects is split. Some publications have noted that sulfoxaflor poses little to no health risks to human beings. The site FluorideAlert.org, however, has stated that toxicity studies have found sulfoxaflor to be toxic to the nervous system and liver.

As per toxicity studies, sulfoxaflor is toxic to the liver and nervous systems. Researchers pointed out that exposure to this chemical can cause development toxicity and hepatotoxicity.

Sulfoxaflor was found to have negatively impacted male rats’ reproductive organs by increasing the weights of the testicles, causing the seminiferous tubules to atrophy, and diminishing the secretions of the coagulating glands, prostate, and seminal vessicles.

Items that can contain sulfoxaflor

Sulfoxaflor is a product of Dow AgroSciences, a unit of the multinational chemical corporation The Dow Chemical Company. It’s most often included in Transform and Closer, two of the company’s branded insecticides.

How to avoid sulfoxaflor

The best way to prevent exposure to this chemical is to avoid purchasing the products containing it, namely Dow’s Transform and Closer.

Those who already have either of these insecticides within their homes are recommended to store them in their original containers and in cool, dry places as far away as possible from food, foodstuffs, potable water supplies, and medications. To dispose of these sulfoxaflor-containing products, contact the local or area regulatory authorities for their recommended disposal methods.

Sulfoxaflor is highly to toxic to honeybees and earthworms, moderately toxic to mammals and birds, and of low toxicity to aquatic animals and plants. Use of products made with sulfoxaflor (namely Dow’s Closer and Transform) can cause bees to become disoriented and hamper their reproductive capabilites.