Staphylococcal infection – causes, side effects and treatments at NaturalPedia.com 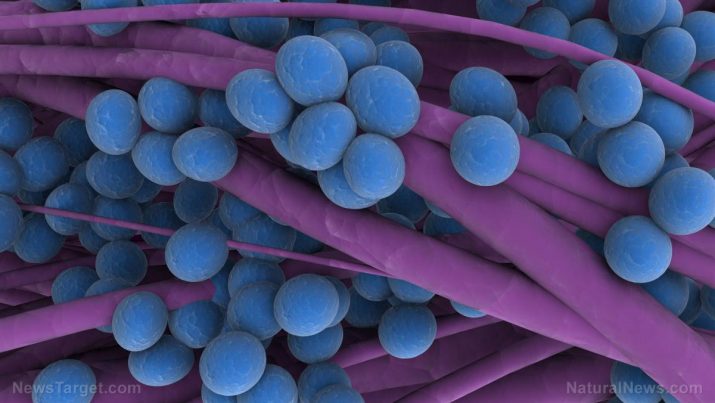 The most common form of staph infections affects the skin, which can look like pimples or boils. Over time, they become swollen and painful and can turn into impetigo or even cellulitis.

Having a cut or a scratch is one of the easiest ways to get a staph infection. However, coming into contact with a person or a surface that has staph bacteria while wounded is also another way to be infected. Most cases are treatable, but some strains such as MRSA (methicillin-resistant Staphylococcus aureus) are more difficult to treat given their resistance to certain antibiotics. 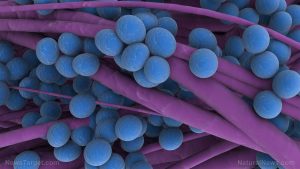 For the most part, a lot of people have staph bacteria on their skin and never develop an infection. If you are infected, however, there is a likely chance that you’ve had it for some time. The bacteria can also be easily transmitted from person to person.

A characteristic that staph bacteria have is its resilience. Staph bacteria are hardy enough to live in objects long enough so they can be transferred. They are also able to withstand drying, extreme temperature, stomach acid, and high levels of salt.

Risk factors for staph infections include:

Food handlers who do not properly wash their hands or use appropriate measures in preparing food can transfer staph from their skin to the food. This can lead to food poisoning, which includes nausea and vomiting, diarrhea, dehydration, and low blood pressure. Staph infections do not cause a fever and symptoms are resolved after a few hours.

In skin infections caused by staph bacteria, a common symptom is the formation of a boil from a hair follicle or oil gland. This can be seen under the arms or around the groin or buttocks.

Aside from impetigo and cellulitis, staph infections can lead to other, more severe, complications. In the skin, it can lead to scalded skin syndrome, where the bacteria breaks down the skin protein, causing large blisters that are similar to burning to form. If it affects a large area of the body, it can be life-threatening. If a staph infection occurs in breastfeeding women, it can lead to mastitis (inflammation of the breast) or even in abscess of the breast where the bacteria are released into the milk.

Once the bacteria enter the bloodstream, it causes a condition known as bacteremia or sepsis. This can result in shock, a collapse of the circulatory system, and even death, in some cases.

In an anaerobic environment, S. aureus bacteria release toxins, which can lead to a condition known as toxic shock syndrome (TSS). A person with TSS will experience a high fever, vomiting, diarrhea, and muscle aches, after which his blood pressure will dramatically decrease, leading to shock and even death.

Some food items that are known to treat a staph infection include:

It could be difficult to eliminate the chances of being infected by staph bacteria – simply because a lot of people have it on their skin. However, practicing proper hygiene, such as regularly washing hands, taking regular baths, and keeping cuts clean and covered, goes a long way toward reducing it. It also helps to avoid sharing towels, washcloths, bed linen, toothbrushes, and razors.

If a person has a skin-based staph infection, the following items could help relieve symptoms.

Staphylococcal infections are infections caused by the eponymous bacteria.

Most infections are caused by Staphylococcus aureus, which can cause skin infections, pneumonia, and even blood poisoning.

Many people have Staphylococcus bacteria on their skin and never develop an infection.

In skin infections caused by Staphylococcus bacteria, a common symptom is the formation of a boil from a hair follicle or oil gland.