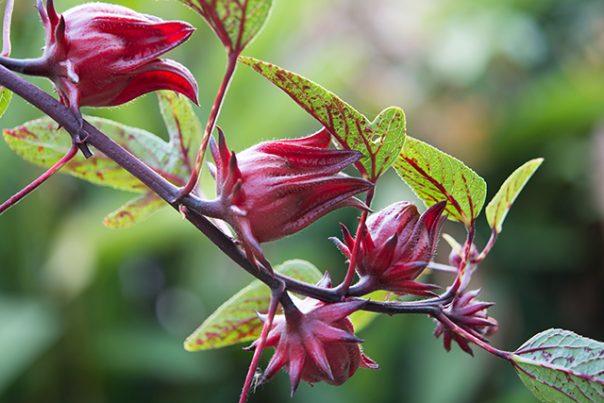 Roselle (Hibiscus sabdariffa), also known as red sorrel, is a species of hibiscus native to West Africa and naturalized in the tropical and subtropical regions of the world. These perennials are highly versatile plants grown for a wide array of uses, most notably as fiber, food coloring, and as actual food. Roselle is known as an herbal medicine as well, especially as a remedy for many common illnesses.

According to 2BeingFit.com, rosselle contains the following nutrients:

Roselle can help reduce high blood pressure due to its high content of anthocyanins and potassium. The vivid coloring of hibiscus flowers can be attributed to anthocyanins, which also decrease blood pressure to manageable levels. In addition, anthocyanins can lower bad or low-density lipoprotein (LDL) levels without affecting good or high-density lipoprotein (HDL) cholesterol. Potassium, on the other hand, relaxes the blood vessels and ensures that blood is able to flow through them smoothly.

According to HealthBenefitsTimes.com, a 54-gram serving of roselle can deliver 29 mg or 6.90 percent of the recommended daily intake of magnesium. This modest serving of magnesium is a good preventive measure against constipation. Magnesium draws water into the gut then into the stool, and encourages the muscles of the colon to contract, both of which greatly reduce the risk of constipation.

In addition, that same serving of roselle is loaded with 123 mg or 10 percent of the recommended daily intake of calcium for adults above the age of 19. This means that taking roselle can help minimize the chances of developing diseases related to calcium deficiency such as osteoporosis. Moreover, it can ensure the healthy growth of the teeth and gums.

Roselle can reduce the risk of or alleviate the symptoms of the common cold and flu. The vitamin C content plays a role in this, as does the roselle flowers’ ability to thin mucus and making it easier to expel from the body.

Roselle can benefit the heart, digestive system, and bones thanks to their varying amounts of important nutrients and health-promoting properties.

Ways to use roselle

All parts of the roselle plant can be made into a tea. To use the leaves, calyxes, or flowers, add one ounce of dried flowers, leaves and calyxes to two-and-a-half cups of boiling water and let it stand for 15 minutes before straining it. Roselle calyx tea will taste sharp so sweeten it with licorice root or lemongrass. To use the roots or seeds, add one ounce of either roselle seeds or roots to a two-and-a-half-cups of cold water in a pan then bring to a boil. Simmer until the liquid is reduced by half, then strain and serve. One cup a day split into three doses should suffice.

Apart from taking roselle as a hot tea, it can be turned into a refreshing iced tea or jam too. Iced roselle tea simply calls for adding the tea made from calyxes into a quart jar then combining with ice cubes and sugar. Roselle jam is just as easy: Boil the pods for 15 minutes then strain the seeds before adding the calyxes and sugar. Boil until the mixture has reduced and become similar in appearance and texture to jam.

Roselle tea can cool the body and satiate thirst quite well, which is why some individuals drink it in place of commercial sports drinks. This is believed to be caused by the diuretic quality of roselle, which can help purge excess fluids from the body.

Frequent intake of roselle can reduce the risk of high blood pressure, constipation, osteoporosis, the common cold, and the flu. As a result roselle can also support the heart, digestive system, immune system, and the bones.