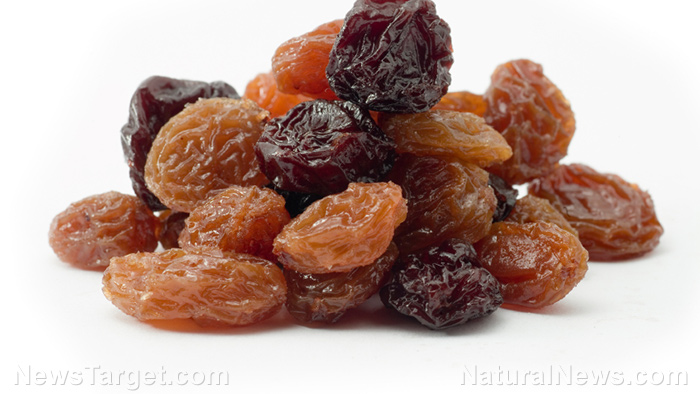 Looks can be deceiving. This quote is actually applicable to raisins, which — even though they are bite-size and treated by children as candy — actually pack a lot of nutrients. 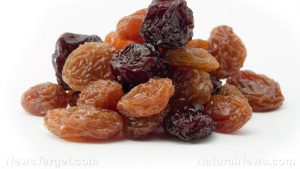 Raisins are a good source of antioxidants, specifically catechins, which prevent cancer cells from growing, or if they already have taken root inside the body, hinder their rapid development.

Raisins can do wonders for people who have, or are prone to having, diabetes, because they regulate sugar levels. They also make sure that leptin and ghrelin, which are the hormones that are responsible for telling you to eat and to stop eating, are regularly released by the body so that you can avoid overeating.

Phenolic phytonutrients aid in fighting bacterial and viral infections such as fevers and colds. Eating foods that are rich in them, such as raisins, can definitely help you lessen your sick days. Phenol, an antioxidant, also stops free radicals from harming skin cells like collagen, and elastin. This means that signs of early aging — such as wrinkles, fine lines, crow’s feet, or blemishes — are delayed from showing. Skin sagging is also prevented because phenol firms up the skin.

Everyone strives to have clear skin. Resveratrol works toward this goal by eliminating harmful cells from the blood. Aside from physical and aesthetic benefits, raisins can also give you protection against skin cancer with their amino acids that serve as blocks against the harmful effects of the rays of the sun.

No one ever accused raisins of being similar to the carrot, but they are actually very alike in the sense that both contain huge amounts of vitamin A, beta-carotene, and A-carotenoid, all of which contribute to having healthy eyes.

Arginine, which contributes to sperm motility, or the increased chances of fetal conception during sexual contact, is also found in raisins. In India, it is common tradition that a couple about to be wed are given a glass of milk with raisins and a pinch of saffron to help ensure that the bride conceives. People, especially men, who have a problem with sexual endurance, are advised to consume a fair amount of raisins daily.

Raisins also contain calcium, which strengthen teeth and bones. Aside from calcium, raisins also contain oleanolic acids, which fight against tooth decay and cavities. They also help fight breakage of teeth. Boron, which prevent the proliferation of germs in the mouth, is also found in raisins.

Raisins aid in the proper functioning of the digestive system and reduce the risk of diarrhea and constipation.

They also help metabolize the body, so that you can actually gain weight without the fear of increasing bad cholesterol levels.

When it comes to the regular formation of blood in the body, ingesting raisins can help you, as they have a lot of iron. This makes raisins good for people with anemia. They also contain vitamin B complex, which is essential in releasing new blood into the body. Having a smooth-flowing circulatory system can contribute to the emergence of healthy hair follicles for strong and shiny hair.

Raisins can best be enjoyed with a glass of warm milk. Most of the time, they are baked inside pastries such as biscuits, pies, muffins, cookies, and cakes. They can also be added to jams, jellies, and puddings for additional flavor. Here are other meal suggestions.

Raisins contribute to the flawless operation of your circulatory system.