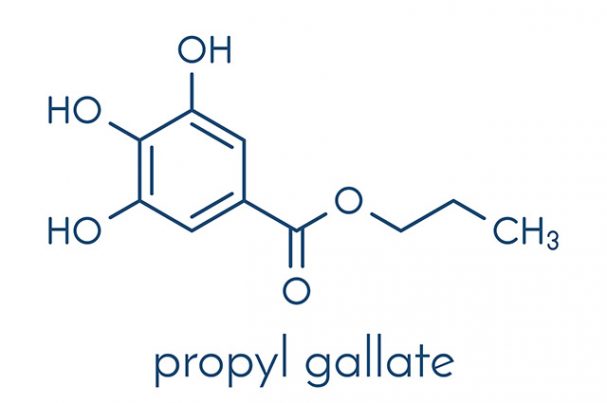 Propyl gallate is classified as a type of ester that is formed after gallic acid and propanol are condensed. The chemical is characterized by its white to light beige crystalline powder form, according to an entry featured on the Chemical Book website. The compound tastes bitter and may either have a faint odor or be completely odorless. Propyl gallate is insoluble in water and is known to react with oxidizing agents.

The chemical is not compatible with strong acids, bases, and reducing agents. Propyl gallate is also found to turn a darker hue in contact with iron and iron salts, thus contact with metals ought to be prevented. The compound is commonly used as an antioxidant for various food products such as animal fats and vegetable oil. Likewise, the chemical is used as a preservative in other oil-containing foods — such as soup bases, chewing gum, and cereals as well as meat products, mayonnaise, and potato sticks — to boost their shelf life and prevent spoilage.

According to the article, the chemical works best with polyunsaturated fats. Propyl gallate is also used as an antioxidant agent in other industrial products such as waxes, esthers, emulsions, and transformer oils as well as lubricants and adhesives. Furthermore, the chemical is used in the cosmetics industry in the production of personal care products such as soaps, moisturizers, perfume, and lotion. Propyl gallate is also utilized in the manufacturing of  lipstick and other make-up, other hair care products and bath essentials as well as toothpaste and sunscreen.

Harmful effects that can be caused by propyl gallate

Propyl gallate is notoriously known to cause certain types of cancers and tumors, an article on The Organic Diabetic website has revealed. The article has cited a study carried out by the U.S. Department of Health and Human Services’ National Toxicology Program, which has shown that rats exposed to propyl gallate  developed thyroid tumors and rare brain tumors. Likewise, the animal models have suffered from prostate inflammation, adrenal gland tumors, and preputial gland tumors.

The article has also stressed that the toxic chemical is extremely detrimental to the respiratory tract. According to the entry, propyl gallate may trigger the onset of allergic reactions, asthma attacks, and breathing difficulties. The compound is also classified as an endocrine disruptor, which in turn may detrimental to the endocrine system and affect the body’s hormonal balance.

Another article published on the Stop Killing my Kids website has stressed that propyl gallate is significantly harmful to the body’s digestive profile. The chemical is found to trigger the onset of pancreatic tumors and liver damage. The compound is also tied to an increased risk of developing stomach irritations. Propyl gallate is found to negatively affect the urinary system too. According to the article, the harmful chemical may raise the odds of suffering from kidney damage. Propyl gallate exposure may lead to skin irritation as well.

Propyll galate is widely implicated in the onset of cancers in various parts of the body such as the adrenal glands, the preputial glands, the thyroids and the brain. Likewise, the compound is known to negatively impact the respiratory tract, digestive system and the endocrine system. The toxic chemical is also found to harm the urinary tract, the skin and the male reproductive health.

Propyl gallate raises the risk of developing cancers and tumors.

Propyl gallate is harmful to the respiratory tract and the digestive system.

Propyl gallate is detrimental to the kidney health and skin condition.