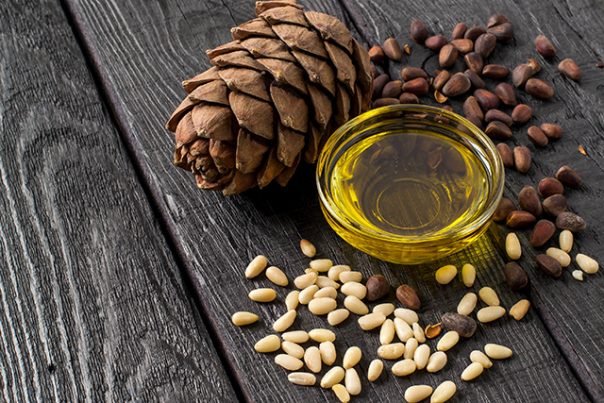 Pine seed oil is a type of a pressed vegetable oil that is extracted from the edible seeds of different species of pines, such as the European variety known as Pignoli and the American variety known as pifiions. The oil’s quality depends on the type of pine nut it was extracted from. The pine seed oil that has the best quality is the Siberian pine nut oil. Pine seed oil is also commonly known as pine nut oil or cedar nut oil. It has high curative properties and has a very low smoking point. It was first used for cooking in Russia and was used for trading in France. 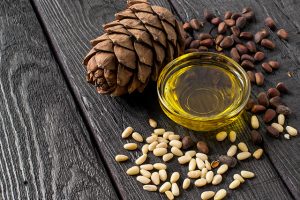 Pine seed oil contains a lot of nutrients, as listed by OnlyFoods.net. These include:

According to an entry by The Fusion Model, pine seed oil can be used for digestive tract disorders. A 2008 study published in the Journal of Food Chemistry found that its oil contains antioxidants that act as free radical scavengers, which help in reducing the oxidative damage to the cells in the digestive tract. The oil can also be used to treat and prevent bloating and inflammation. Pine seed oil is also beneficial for the digestive health as it can help in digestion and boost metabolism. Therefore, it can also help in losing weight. Pine nuts and its oil can also be used in lowering low-density lipoprotein or LDL levels in the body because of the pinolenic acid they contain. This was shown in a study of Korean pine seed oil in 2004. In a 2008 study published in the journal Lipids in Health and Disease, it showed that Korean pine nut oil could reduce food consumption by increasing the satiety hormones in both postmenopausal and overweight women, acting as an appetite suppressant.

However, there are a few side effects that pine seed oil can cause in the body. One of these is allergic reactions, especially if a person is allergic to peanuts or other tree nuts. Its symptoms include swelling, wheezing, stomach ache, itchy hives, and vomiting. Moreover, it can trigger anaphylaxis, which is a condition that causes the airways to swell and blood pressure to drop. Other side effects of pine seed oil include seizures and bleeding.

In an entry by the OrganicFacts.net, pine seed oil is beneficial for the integumentary system as it can treat different skin problems such as psoriasis, itching, pimples, eczema, poor skin, scabies, sores, and fleas. Pine seed oil also supports the ocular system. Because it neutralizes free radicals in the body that cause degradation of the body’s cells, it can improve the health of the eyes and protect them from age-related eye disorders such as macular degeneration and cataracts. Moreover, the oil is beneficial for the excretory system. Due to its antibacterial properties, it can be used as a natural remedy for urinary tract infections. Pine seed oil supports the respiratory system. It is helpful in treating respiratory problems such as cough and cold. As an expectorant, it loosens phlegm and mucus from the respiratory tract and makes it easier to get rid of them. Lastly, it is beneficial for the digestive system. Aside from aiding in metabolism, it is good in lessening the inflammation of the gall bladder and the risk of having gallstones.

Ways to use pine seed oil