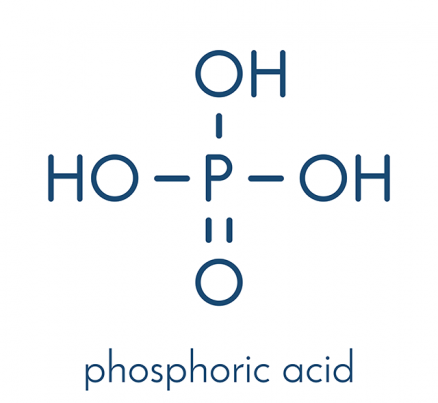 Phosphoric acid is a colorless and odorless inorganic mineral acid that has phosphorus. It is a sequestering agent which binds many divalent cations (positively charged ions that are attracted to the cathodes in electrolysis) such as Ca ++, Cu ++, Fe ++, and Mg ++. It has the chemical formula H3P04.

It has its uses in dentistry and orthodontics as an etching solution, to clean and polish teeth surfaces where dental appliances or fillings will be installed. It contributes to bone and teeth strength as well as in the functioning of many metabolic processes.

Phosphoric acid as a pure solid melts at 42.35 degrees Celsius and has a density of 1.834 grams per cubic centimeter. Phosphoric acid liquids are usually an 85 percent aqueous solution. Phosphoric acid is utilized in making fertilizers and detergents and in food processing. It has also sometimes been used as treatment for lead poisoning.

It can also be used as solvents (for cleaning or degreasing), solvents (part of product formulation or mixture), in batteries, cleaning and furnishing care products, laundry and dishwashing products, paints and coatings, paper products, photographic supplies, plastic and rubber products, water treatment products, adhesives and sealants, and metal products (used to dissolve rust or iron oxide, which it changes to a water-soluble phosphate).

The federal Water Pollution Control Act classifies phosphoric acid as a hazardous substance under section 311(b)(2)(A). It is further regulated by the Clean Water Act Amendments of 1977 and 1978. The United States Food and Drug Administration (FDA) gives it a generally recognized as safe (GRAS) rating when it is added as substance in food manufacturing, where it is used as an antioxidant, acidity regulator, flavor enhancer, preservative, clarifying agent, and sequestrant.

Phosphoric acid is contained in foods such as cheeses, meat products, and soft drinks. It can also be found in toothpastes. If you want to avail of the benefits of phosphoric acid, but would rather consider healthier alternatives, try going for coconut water, ginger ale, sparkling bitters, green tea or black tea, homemade almond milk, kombucha, and vegetable juice. 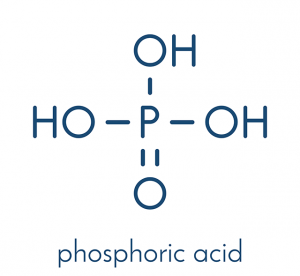 Harmful effects that can be caused by phosphoric acid

Liquid phosphoric acid can cause burns to the mouth and stomach if ingested. Exposure to it can also burn the eyes and skin.

Phosphoric acid is bad for the respiratory system. It can bring about asthma-like reactions such as asphyxiation due to swelling in the throat and labored breathing. Furthermore, it may cause lung edema, and in worst-case scenarios, pneumonitis, which is an inflammation of the lung tissue.

Phosphoric acid is bad for the digestive system. It can induce abdominal pain due to pancreas necrosis, digestive tract necrosis, and internal bleeding.

Phosphoric acid is bad for the skeletal system. It is said to comnine in the digetive tract with calcium and magnesium, creating salts that block the body from absorbing additional calcium and magnesium. This may cause osteoporosis, which along with fractures, are representative of major health problems in the U.S. The lifetime risk of fracture increases 13 percent for men and 40 percent for women; hip fractures have been associated with increased mortality of up to 20 percent.

Phosphoric acid is bad for the cardiovascular system. In a scientific article published by the European Food Safety Authority in 2012, food additives that contain phosphorus contribute to the development of heart ailments.

Phosphoric acid is bad for the skeletal, cardiovascular, respiratory, and digestive systems.

Liquid phosphoric acid can cause burns to the mouth and stomach if ingested.

Phosphoric acid is contained in foods such as cheeses, meat products, and soft drinks.