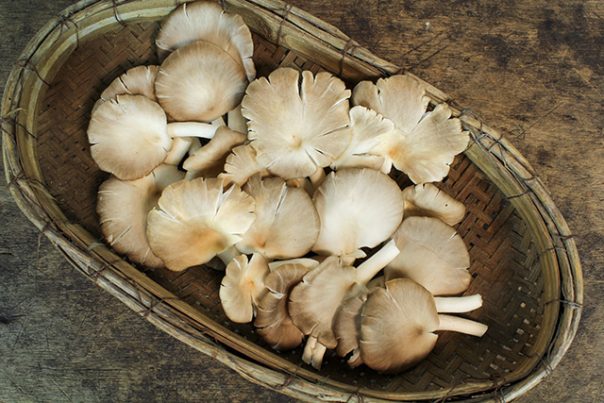 Oyster mushrooms, which have the scientific name Pleurotus ostreatus, are edible mushrooms that grow on both hardwood and conifer tree species, are mostly abundant in forestlands in the spring and fall, and prefer temperate and subtropical climates. They came into existence in Germany during the World War I but are now grown for commercial and industrial purposes in Africa, India, South East Asia, and Europe.

Oyster mushrooms are broad-, fan-, or oyster-shaped and have white-gray or tan-brown caps and white- to cream-colored gills.

G.L. Barron and R.G. Thorn in 1986 found out that the oyster mushroom is carnivorous and feasts on nematodes or roundworms, leading gardeners and farmers to hope that one day the mushroom can be utilized as a kind of worm-killer so that they won’t have to resort to toxic pesticides to kill such pests. In fact, one such patent, issued to Bryan Hiromoto in 2000 and which covered products with such worm-killing capabilities, used active ingredients from the oyster mushroom.

After two years, in 1988, Barron discovered that aside from eating nematodes, oyster mushrooms are also adept at consuming bacteria (Pseudomonaas and Agrobacterium) to obtain nitrogen and protein. 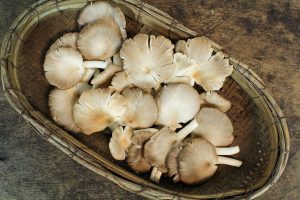 In 2004, a study on the effect of oyster mushrooms on anti-retroviral-induced hyperlipidemia (or the high concentration of fats and lipids in the blood) in patients who are afflicted with human immunodefficiency virus (HIV) was conducted by Dr. Donald Abrams of the University of California San Francisco General Hospital. The study showed that patients who drank tea made from dried oyster mushrooms had their triglycerides and low-density lipoprotein (LDL) levels lowered.

Oyster mushrooms are rich in lovastatin, which can lower cholesterol levels and thereby reduce the risk of cardiovascular conditions.

Oyster mushrooms have molecular mechanisms that “specifically inhibit growth of colon and breast cancer cells without significant effect on normal cells, and have a potential therapeutic/preventive effect on breast and colon cancer” by hindering tumor growth, according to the International Journal of Oncology.

The vitamin D in oyster mushrooms manages the genes in that influence cell growth – thereby protecting you from autoimmune conditions such as flu and the common cold – and lowers blood pressure, along with potassium, another nutrient that can be found in oyster mushrooms. Vitamin D can help prevent the onset of type-1 and type-2 diabetes. According to the United States Department of Agriculture, one cup of oyster mushrooms represent four percent of the daily recommended intake.

The iron content of oyster mushrooms is high; in fact they contain a higher amount of iron than their meat counterparts.

Eating oyster mushrooms can cure constipation as they are rich in fiber; one large mushroom alone already has 14 percent of your daily recommended intake. Oyster mushrooms can also take care of stomach problems like hyperacidity.

Oyster mushrooms are good for the heart, as they contain Vitamin B3 that aids in reducing the risks of atherosclerosis, or hardening of the arteries, which can cause heart disease. Vitamin B3 also treats pellagra, or the condition that arises due to a lack of niacin in the body.

Calcium and phosphorus, along with Vitamin D, protect jawbone mineral density, which strenghtens your teeth and teeth enamel, contribhuting to overall dental health.

Oyster mushrooms help get rid of toxins that get lodged in the liver.

Ways to use oyster mushrooms

Use oyster mushrooms in tacos, in soups, in sandwiches; in anything, really. Throw them in the pan with other ingredients like bell peppers, cheese, onions, and the like. Saute or fry them with olive oil and garlic. Here are some recipes that can get you started on your very own scrumptious oyster mushroom dish.

Oyster mushrooms can take care of stomach problems like hyperacidity.

Calcium and phosphorus, along with Vitamin D, protect jawbone mineral density, which strenghtens your teeth.