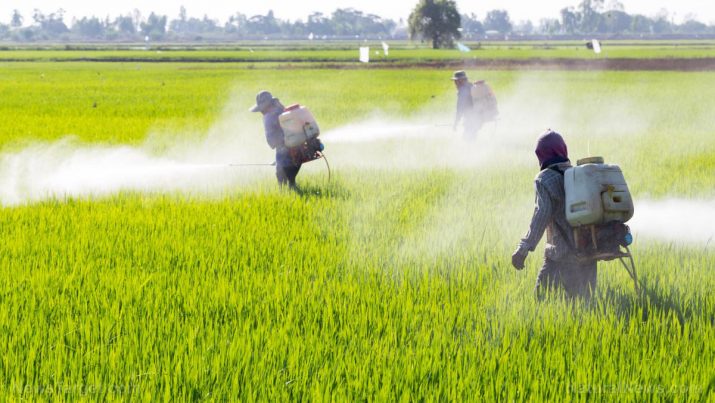 Oxamyl, which belongs to a family of pesticides known as carbamate, is an insecticide, acaricide, and nematide which controls a wide variety of insects, mites, ticks, and roundworms. The chemical may be used by systemic distribution and on contact, and may be applied directly on the target plant or the soil surface. It can be used in the form of liquid or granules, however, the granular form is banned in the U.S. The pesticide works by inhibiting the normal functioning of cholinesterase, which is an important nervous system enzyme. Oxamyl is used on field crops, vegetables, fruits, and ornamental plants, such as apples, bananas, carrots, celery, citrus, cotton, cucumbers, eggplants, garlic, ginger, cantaloupe and honeydew melon, onion (dry bulb), peanuts, pears, peppers, peppermint, pineapples, plantains, potatoes, pumpkins, soybeans, spearmint, squash, sweet potatoes, tobacco, tomatoes, watermelons, and yams. Oxamyl is also used on non-bearing apple, cherry, citrus, peach, pear, and tobacco. It can be physically described as an off-white crystalline powder or a white crystalline solid with a slight sulfurous odor. It has poor stability because it is a carbamate. Oxamyl has the molecular formula of C7H13N3O3S. 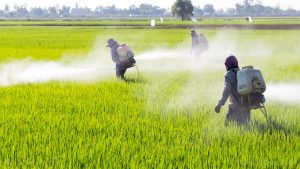 Oxamyl has several known side effects on humans. The chemical can be absorbed in the body through inhalation, ingestion, skin contact, and eye contact. It can cause skin irritation when it comes in contact with the skin. Similarly, it can irritate the eyes upon contact. Oxamyl exposure can cause nausea, vomiting, diarrhea, and abdominal pain. In addition, it can cause rapid, severe poisoning with headache, dizziness, blurred vision, tightness in the chest, sweating, nausea and vomiting, diarrhea, muscle twitching, convulsions, coma, and death. Likewise, it cause numbness, weakness in the hands and feet. Repeated exposure may cause personality changes of depression, anxiety, or irritability. Oxamyl was found to be toxic to fish, birds, and bees.

Items that can contain oxamyl

Oxamyl can be found in pesticide products that are used to control pests such as aphids, spider mites, ticks, roundworms, and nematodes in field crops, vegetables, fruits, and ornamentals. Most products that contain the pesticide was classified by the U.S. Environmental Protection Agency (EPA) as Restricted Use Pesticides because of oxamyl’s acute harmful effects to humans and its toxicity to animals. Some of the trade names of oxamyl include Blade, DPX 1410, Oxamil, Oxamimidic Acid, Pratt, Thioxamil, and Vydate.

There are several methods to avoid or reduce exposure to oxamyl when handling the chemical. One of these ways is to wear appropriate clothing, such as protective gloves, suits, footwear, and headgear. Wearing these can help avoid skin contact with oxamyl. Another way is to wear appropriate eye protection, which is resistant to impacts with side shield or goggles. In addition, wear a face shield together with goggles to be more protected. Furthermore, use an approved respiratory protection. Wearing this protective equipment can help avoid breathing in the chemical.

Oxamyl may cause eye and skin irritation.

Oxamyl may cause nausea, vomiting, diarrhea, and abdominal pain.

Oxamyl is toxic to fish, birds, and bees.