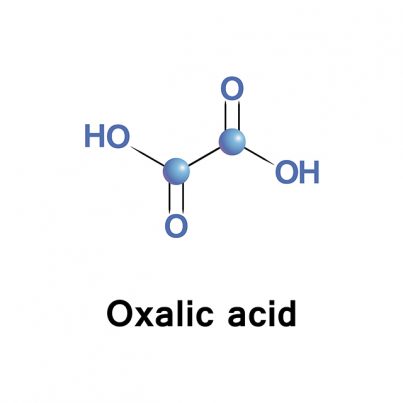 Oxalic acid is an odorless white solid substance. It is produced in the body by the metabolism of glyoxylic acid or ascorbic acid, which is commonly known as vitamin C, and it is excreted in the body through urine.

It is a strong dicarboxylic acid that can be found in many plants and vegetables. These include leafy green vegetables, blackberries, blueberries, raspberries, currants, figs, plums, tangerines, cocoa, nuts, and seeds. The body can also produce oxalic acid on its own.

When consumed, oxalic acid can bind to minerals to form compounds such as calcium oxalate and iron oxalate. This mostly occurs in the colon, but can also take place in the kidneys and other parts of the urinary tract. This acid is used as an analytical reagent and general reducing agent.

The problematic thing about oxalic acid is that it forms oxalate crystals when mixed with calcium, which can cause kidney stones. 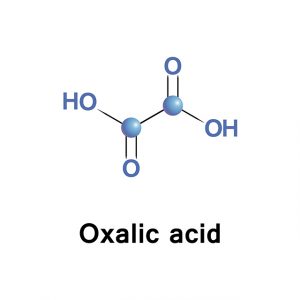 There is not much data about the health benefits of oxalic acid. Organic oxalic acid does not present any problem. In its raw form, it is one of the most important minerals needed in the body to maintain tone and peristalsis of the bowel.

Many foods that contain oxalates are very healthy, but oxalic acid itself has harmful effects in the body. However, healthy people who are trying to stay healthy do not need to avoid nutrient-dense foods just because they are high in oxalates.

There is more information on the negative effects of oxalic acid than its health benefits. One of these is that oxalic acid may contribute to kidney stones. Normally, calcium and small amounts of oxalate are present in the urinary tract at the same time, but they remain dissolved and does not cause problems.

Apparently, there are times when they bind to form crystals. These crystals can lead to the formation of stones, especially when oxalate is high and urine volume is low. People who had experienced having kidney stones may be advised to minimize their consumption of foods high in oxalate. However, oxalate is no longer restricted to people with kidney stones because most of the oxalate found in urine is produced by the body, rather than absorbed from food. Instead, doctors recommend a strict low-oxalate diet for these patients.

Others claim that a high-oxalate intake may be linked to the development of autism and vulvodynia, which is characterized by chronic unexplained vaginal pain. However, there is not enough evidence to prove these, but study results showed that dietary oxalate might worsen, rather than cause the condition.

Oxalic acid is an odorless white substance that can be produced by the body on its own or can be obtained from food. It plays a role in the maintenance of tone and peristalsis of the bowel.