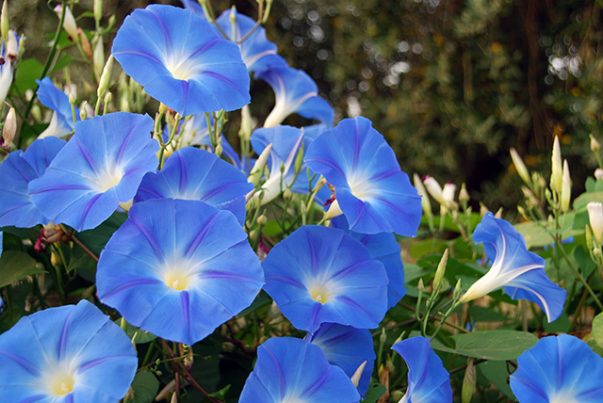 As their name suggests, morning glories are twisting vines with heart-shaped petals that open in sunshine. Chinese fairy tales often talk about morning glory as a symbol of unrequited love or love that can only meet once a year. According to legend, two people fell so passionately in love that they forgot their responsibilities, both to their families and to the gods. The deities, jealous of the purity and intensity of the lovers’ passion, forced the two apart, demanding that they only meet once every year. The lovers, horrified at this unjust sentence, began to cry and from the woman’s heart, a single essence of her soul dropped to the ground. From the concentrated ember of her love sprouted the morning glory which refused to bloom until the lovers reunited. It is said that when the two saw each other again, the sun came out with such brilliance that the sleeping bud awoke and revealed brightly-colored petals — hues that represented the lovers’ never-ending adoration for each other.

Today, morning glories are considered a weed. There are several species of the plant, but most of them are perennials and bloom anywhere from May through September. 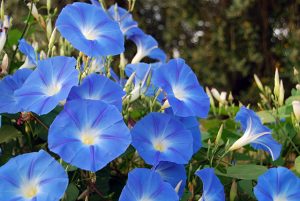 Botanists have yet to fully examine the complete nutritional profile of the morning glory. Nonetheless, the flower is noted to have remarkably purifying, calming, and cleansing effects which scientists believe indicate the plant’s anti-inflammatory and antioxidant compounds. Initial reviews show the plant to be a rich source of such compounds as aspartic acid, arginine, cysteine, tropine, and pseudotropine.

The flower is used therapeutically to combat the effects of stress. Morning glories make people feel calm and peaceful; an effect, traditional healers like to joke as, similar to reuniting with a lost love and being in their arms again. A word of caution, though: morning glory appears to have the same toxicological profile as many tranquilizers and antipsychotic medications. They should not be taken alongside some other prescriptive medicine or alternative healing roots for depression such as St. John’s Wort.

Morning glory is believed to have antibacterial and antifungal properties too, preventing the onset of various diseases as salmonella poisoning, and conditions caused by contamination with Escherichia coli and Candida Albicans.

Chinese herbalists also recommend the plant as an anti-diabetic medication. They believe that the plant keeps blood sugar levels in check.

Native Americans used to crush the flower and apply it topically as an antidote for spider bites.

The plant can be considered an adaptogen, although it’s more potent as a calming agent. It shows promise in lowering the heart rate and lessening the negative effects caused by stress and worry. Morning glories play a specific role as to how the brain responds to external stimuli and can support cognitive function.

Ways to use morning glory

Morning glories can be made into a stir-fry dish. They have a mild, savory flavor and add a certain crunch to a variety of dishes.

You can also use the flower as part of a tea.

Morning glories have a calming effect and are used to make people less stressed.