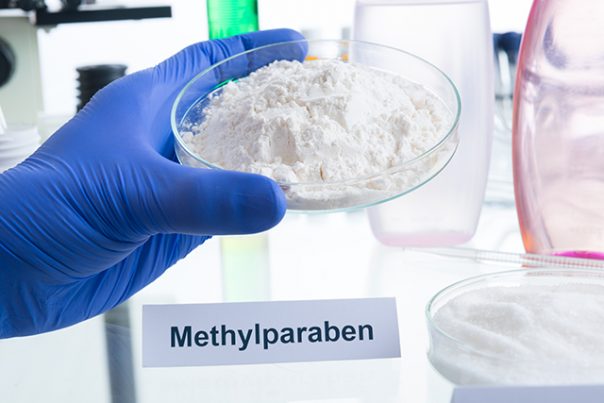 Methylparaben is a chemical allergen with a chemical formula of C8H8O3. It is a stable, non-volatile compound typically used as an antimicrobial agent, preservative, and flavoring agent in foods and cosmetics. Like all parabens, it is used to stop the growth of bacteria, mold, and fungus to increase the shelf life of beauty products and some food. The chemical can be found in cloudberry, yellow passion fruit, and alcoholic beverages, such as white wine, botrytised wine, and bourbon. It is completely absorbed through the skin or after ingestion. Moreover, it is hydrolyzed to parahydroxybenzoic acid and metabolites are excreted in the urine. 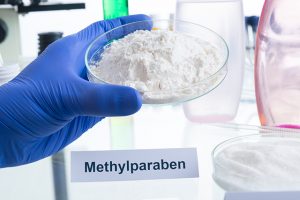 Harmful effects that can be caused by methylparaben

There are several potential hazardous effects of methylparaben. Methylparaben is harmful to pregnant women. Studies have shown that parabens can interrupt reproductive hormones and mimic the hormone estrogen, according to the Environmental Working Group (EWG). The compound is considered as an endocrine disruptor, which affects the network of glands that secrete human hormones like estrogen.

Studies have also shown that traces of parabens are associated in breast cancer tumors, prostate cancer, genital abnormalities in male babies, decline in the quality of semen in men, and early-onset puberty in girls. Moreover, the compound has been associated to skin irritation and allergic reactions.

The use of sodium methylparaben in perfumes has been banned in Europe because of its negative effects on skin pigment. Meanwhile, the Food and Drug Administration (FDA) in the United States has not yet banned the said chemical.

As mentioned earlier, methylparaben is commonly used as a preservative in women’s cosmetics, such as skin creams and deodorants. Studies found that this chemical increases the risk of breast cancer or speed up the growth of these tumors.

On the other hand, methylparaben also affects male fertility. Several studies suggested that compounds that contain parabens can reduce the production of sperm and motility. This is because methylparaben is a paraben, which imitates the effects of estrogen in the human body.

This chemical allergen also has harmful effects on the skin. Skin treated with creams that contain the compound can be damaged if exposed to the sun’s ultraviolet-B rays. Damaged skin cells can cause diseases such as skin cancer.

In addition, the compound may be harmful to the eyes. Eyedrops that contain even little amounts methylparaben can impair the lining of the eyes and the cornea.

Methylparaben is a chemical allergen that is widely used as an antimicrobial agent, preservative, and flavoring agent in foods and cosmetics. The compound can be found in cloudberry, yellow passion fruit, and alcoholic beverages, such as white wine, botrytised wine, and bourbon. It can cause damage to the skin and eyes. Moreover, it is linked to breast cancer and skin irritations. It also decreases the sperm production of men and and disrupts the reproductive hormones of women.