Measles – causes, side effects and treatments at NaturalPedia.com 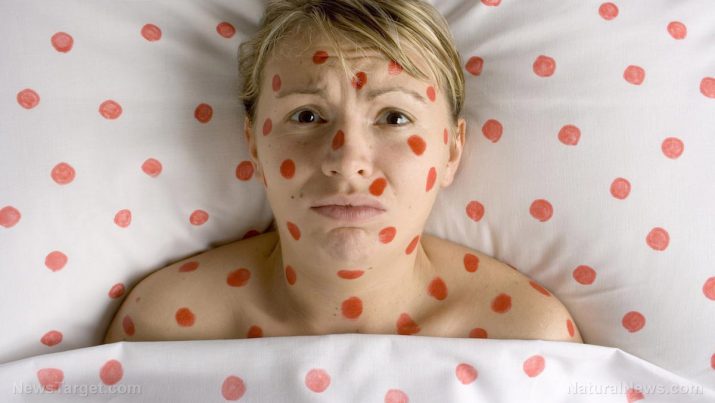 Measles is an acute contagious disease caused by a morbillivirus, characterized by an eruption of distinct red spots on the skin. The condition is also known as rubeola. The name “measles” comes from the Middle English “maselen” meaning “many little spots,” while “rubeola” refers to the reddish color of the rash.

Measles is a common disease in many developing countries. More than 95 percent of measles-related deaths occur in countries with low per capita income and inefficient health programs. 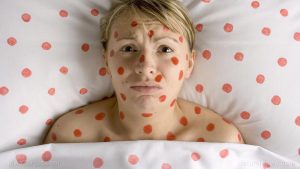 Measles is transmitted via contact with bodily fluids from the nose or mouth of infected persons. The initial symptoms usually appear 10 to 12 days after infection. They include a runny nose, bloodshot eyes, tiny white spots on the inside of the mouth and throat, known as Koplik’s spots, and high fever, which can last several days, and it may fall and rise again when the rash appears.

The rash usually starts behind the ears and spreads downward to the neck and face. After a couple of days, it spreads to the rest of the body, including the legs.

Other accompanying symptoms may include:

Children with vitamin A deficiency are more likely to develop measles.

Severe cases of measles often occur among young children with vitamin deficiency, older adults, or people whose immune systems have been compromised by HIV/AIDS and other diseases.

If untreated, measles can lead to serious complications such as ear infections, which can lead to permanent hearing loss, blindness, encephalitis (an infection that causes brain swelling), severe diarrhea and dehydration, and severe respiratory infections such as pneumonia, laryngitis, and bronchitis. Other complications include acute thrombocytopenic purpura, a sudden onset of low blood platelet levels with severe bleeding; or subacute sclerosing panencephalitis, a chronic brain disease that occurs months or years after an attack of measles.

Food items or nutrients that may prevent measles

The measles vaccine is the primary method of preventing measles. However, this vaccine should not be given to these at-risk groups:

Here are some of the best home remedies for measles, which mostly contain antimicrobial and antiviral properties that help relieve symptoms of measles and fight the virus that caused it.

Homeopathic remedies are some of the best ways to treat the symptoms of measles. The following remedies are safe for children of all ages and should not have any adverse effects if taken properly and under the guidance of a homeopath or other qualified professional.

Measles is a contagious disease characterized by distinct red spots on the skin. The condition is also known as rubeola.

Symptoms include a runny nose, bloodshot eyes, tiny white spots on the inside of the mouth and throat, and high fever.