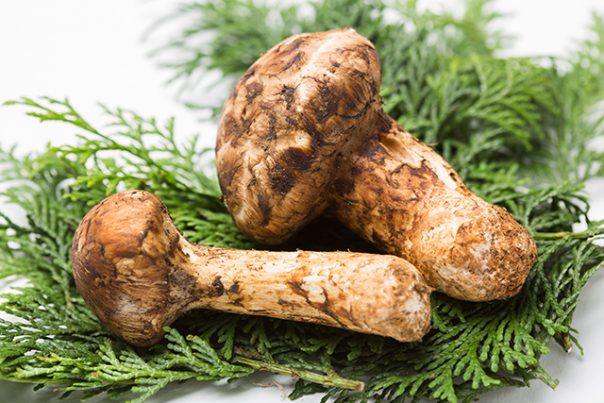 A discussion on mushrooms would not be complete without talking about the elusive (and exclusive) matsutake mushrooms. Otherwise known as the pine mushroom, matsutake are a rare Japanese delicacy that have a distinctive spicy odor and flavor. The mycelium typically blooms during the fall, which is why a trip to Japan during August to November should include a trip to local restaurants, where you’ll surely find several dishes featuring matsutake. Foodies be warned though: Matsutake dishes are typically expensive.

Some genus of matsutake can be found in North America and various parts of Europe, although these are not considered by mushroom connoisseurs as the “real thing”. A majority of the matsutake from these parts are exported to Asia where they command a very high price, despite the assumption of inferiority. This may be because matsutake mushrooms are noted to be dwindling all around the world due to deforestation.

Matsutake collect around the conifer forests in Japan and are special not only because of their taste but because the locals believe the fungus to represent fertility and happiness. A matsutake dish prepared by a loving wife is reputed to heal any form of “soul sickness” of an ailing husband. They are even given as gifts during birthdays or other special occasions.

The mushroom is most flavorful fresh, but can be sliced and frozen for use for three months. Do not attempt to dry matsutake as they tend to lose their flavor this way. 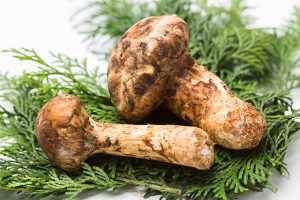 Matsutake is reputed to be a natural anti-cancer remedy. Even so, there are few medical studies that back this claim up. Traditional healers, however, say that the pine mushroom can stop the growth of various cancer cells and have no side-effects. It is believed that regular consumption of matsutake can prevent even the most dangerous of cancers. One animal study seems to confirm this, concluding that matsutake has an 85 percent success rate in reducing the size of different carcinomas.

Understand that pine mushrooms are talked about more for their taste and aroma rather than their therapeutic benefits. As such, there is limited data on what the mushroom can achieve as a medicine. It is presumed, though not validated, that the mushroom can improve the overall immune system.

Ways to use matsutake

Japanese chefs love the fall, in large part due to the matsutake. The mushrooms can appear grilled, steamed, fried, or sauteed and are added to a whole slew of dishes like tempura, sushi, and other rice dishes. The texture of the mushroom is similar to meat but the taste is always very difficult to describe. For the lazy, the best word would just be to say, “spicy”, but there are other twists and nuances that appear here. It is slightly meaty and a little bit sour, with a hint of spice. Some say that the taste is comparable to its aroma, which is a little bit like a particularly ripe or intense cheese.

Matsutake are called pine mushrooms, mainly because of their habit of growing near pine trees. The Japanese revere them. The mushrooms have a distinct flavor which is highly different from most mushrooms that are a bit more tame.