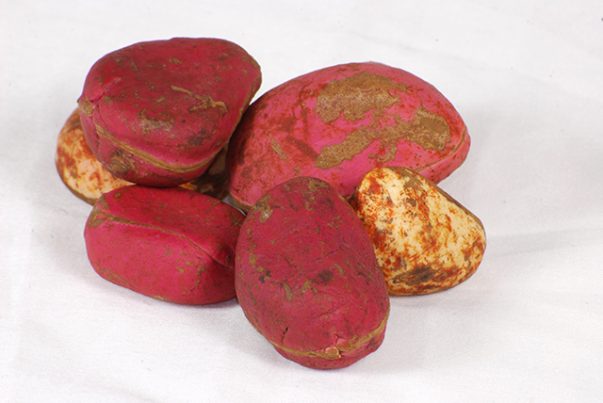 Kola nut is an evergreen that is a member of the cocoa family, the genus Cola, and the species Cola acuminata and Cola nitida. It is endemic to Africa, while at the same time widely-cultivated in central and south America. Looking like chestnut with its brown-colored shell, it can grow up to two inches long.

The kola nut tree can reach up to 25 meters in height. It has long, ovioid leaves which are leatherlike in texture. Its flowers are colored yellow with purple spots. Its fruit is shaped like a star and it tastes sweet.

Kola nuts are placed highly in the practice of culture and religion in West Africa, especially in Niger and Nigeria. The 1980s song “Goro City” by Manu Dibango relates how important kola nuts – goro in the Haussa language – are to Niamey, the capital of Niger, as they serve as religious objects during prayers and religious venerations and also during significant life events like baptismals, weddings, and funerals. This practice is also done in some parts of the United States and the Caribbean. 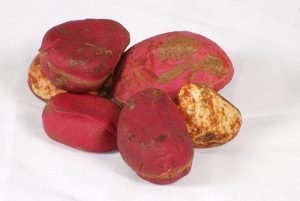 Kola nut increases heart and metabolic rate, according to a study that was published in the African Journal of Biotechnology in 2006. A note of caution, however: If taken in great concentrations, one can be exposed to greater risks of incurring a heart ailment.

Kola nut has cancer-fighting properties. An article in the Journal of Toxicology that was published in 2009 concluded that extracts that were derived from kola nut contain compounds – phytoandrogens and phytoestrogens – that can help fight against the onset of prostate cancer.

Kola nut has antibacterial properties. A 2004 edition of Phytotherapy Research showed that kola nut extracts can reduce the growth and development of the members of the mycobacterium species, which are the bacteria that spread illnesses like meningitis and tuberculosis.

As an antioxidant, kola nut has the ability to fight off harmful free radicals that cause disease, certain cancers, and premature aging.

Because of its caffeine content, kola nut is said to provide energy and improve athletic performance due to its capacity to optimize oxygen production and distribution throughout the body and boost concentration and focus skills. It aids in taking away tiredness and long-term fatigue and can be used to alleviate migraine symptoms as well as morning sickness.

Kola nut is good for the digestive system and has diuretic properties.

Kola nut is good for the respiratory system. It aids in enlarging the size of the alveolar ducts and alveolar sacs – which are small airbags inside the lungs where oxygen and carbon dioxide are interchanged with the blood – to facilitate proper breathing, and in strengtheing the fibers ion the lung tissue.

Also, the theophylline in kola nuts relaxes the bronchioles in people who are suffering from asthma or bronchitis. Theobromine, another vasodilator found in kola nuts dilates blood vessels and lowers blood pressure withn the lungs.

Ways to use kola nut

Kola nut extracts usually act as bases of food supplements due to their ability to suppress hunger and stimulate digestion. Athletes and overweight people will benefit a lot from ingesting kola nuts. It is also a fundamental ingredient in soft drinks.

Again, we are warning people that kola nut is complicated and that dosing procedures that are listed on a kola nut product’s label should always be followed to avoid untoward incidents.

Kola nut is good for the respiratory system as it relaxes the bronchioles in people who are suffering from asthma or bronchitis.

Kola nut is good for the digestive system and has diuretic properties.