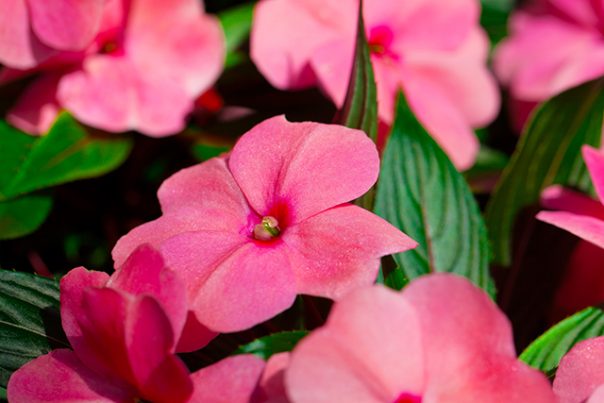 There are no better words to describe the impatiens flower than those written by Erasmus Darwin, an English physician who lived in the 18th century and grandfather to naturalist Charles Darwin. Faced with the grueling task of analyzing medicinal herbs for use against the myriad of diseases plaguing Europe, he penned, “with fierce distracted eye Impatiens stands, swells her pale cheeks and brandishes her hands. With rage and hate the astonished groves alarms. And hurls her infants from her frantic arms.”

Darwin was perhaps referring to the inconceivable rate impatiens proliferate, thus earning it its adjective of being “impatient”. Botanists also lovingly call the plant genus, “Busy Lizzy” due to the speed in which the flowers bloom and reproduce.

There are many varieties of the impatiens flower, with almost all of them serving some medicinal use. The species used by Native Americans, Impatiens Capensis, is also known as jewelweed and grows alongside poison ivy. In a fascinating trick of nature, jewelweed is a fair remedy to anaphylaxis caused by poison ivy. As such, traditional healers faced with a patient experiencing an allergic reaction to the toxin would ask the individual to point to them where they rubbed against the poison ivy. More often than not, these healers would prescribe jewelweed, which would immediately alleviate symptoms. 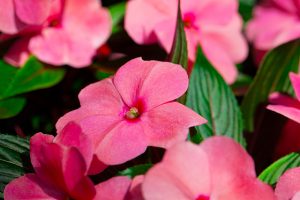 The juice of impatiens, particularly the jewelweed variety, is used to treat all sorts of skin ailments as well as poison ivy toxicity. The Potawatomi and tribes of the Appalachian area used the impatiens to prevent any form of allergic reaction, athlete’s foot, and dandruff. The efficacy of the plant made it a highly-used herb among traditional healers who believed impatiens capable of curing almost anything.

It is sometimes taken as a beverage, although its acrid taste makes it more useful as an emetic, or a substance that causes vomiting. Nutritionists are still on the fence if the plant is toxic in itself. Be exceedingly cautious if you are taking a tea or drink infused with impatiens. Studies contradict on their nutritional and medicinal value when they are taken in this form.

Impatiens do well in healing the skin. They are applied topically, after the stem and petals are crushed to release a slightly viscous sap. Their main purpose is to treat allergic reactions.

Ways to use impatiens

Impatiens are rubbed on the skin to alleviate inflammation caused by allergies. Some people suggest taking the plant as a tea or as a garnish in salad. This is acceptable, although please be warned that there are conflicting research on how safe this is.

Impatiens are annual flowers that grow quite fast. The jewelweed variety often grows alongside poison ivy and is used to treat allergic reactions caused by anaphylaxis.