Hookworm infection – causes, side effects and treatments at NaturalPedia.com 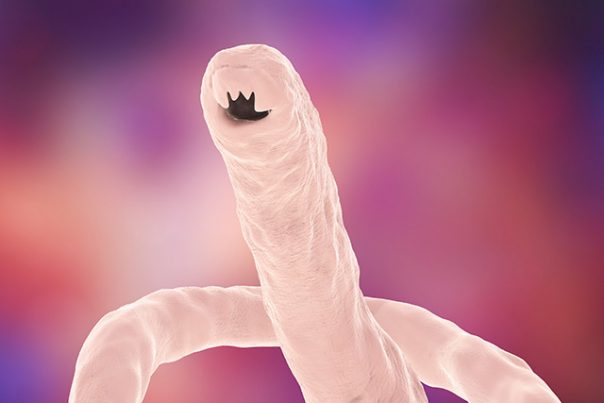 Nematodes (also referred to as roundworms) are one of the most abundant groups on Earth. They are found in soil, freshwater, and marine environments, and even in places such as vinegar, beer malt, and even deep within the Earth’s crust.

However, this also means that nematodes can also be present inside the human body as parasites. According to experts, at least 60 species of roundworms can parasitize humans. Hookworm infections in humans, in particular, are caused by the following nematodes:

Hookworm eggs are found in the stool of an infected host, where they hatch in a day or two after being deposited in a warm, moist place where the soil is loose. The larvae are born and thrive in the soil, with some living up to a month depending on the condition. However, they can penetrate the skin and infect humans after 10 days of development, primarily targeting people who walk barefoot or sit in contaminated soil. A. duodenale, in particular, can infect people that ingested food items containing its larvae.

After the larvae enter the body, they travel through the bloodstream to the lungs. They pass through the air spaces and travel up the respiratory tract, where secretions from the lungs cough up the larvae. They then move into the stomach and reach the intestine, where the larvae develop into adults. Once they mature, they cling by their mouth to the small intestine, feeding on blood and producing anti-coagulants to prevent blood clotting.

Other Ancylostoma species can penetrate the skin; however, these do mature and reproduce in humans. When they do enter the skin, they wander around it, leaving an itchy rash called cutaneous larva migrans. 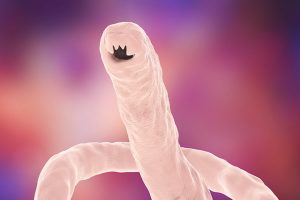 Known symptoms and risk factors of a hookworm infection

Risk factors for hookworm infections include limited access to potable water and poor sanitation. However, people who travel in those areas are also at increased risk of getting infected. The environment is also a factor for the development of the disease. Ideal conditions for hookworm egg incubation include temperatures from 68 to 86 degrees Fahrenheit (20 to 30 degrees Celsius) and warm, moist, and well-aerated soil. These conditions are similar to that of agricultural production, which explains the prevalence of hookworms in rural areas.

In a classic hookworm infection, the symptoms appear a week or two after larvae exposure. This includes the presence of a very itchy or vesicular rash on the site of infection, usually on the hands or feet. Coughing and wheezing follow afterward, an indication of the migration of larvae from the lungs. Once they arrive at the gastrointestinal (GI) tract, a person may feel discomfort or irritation. This may progress to diarrhea, abdominal pain, colic, nausea, and anorexia. In later stages of the condition, or when there is a significantly high number of hookworms in the gut, a person may experience anemia. Hookworm infections are particularly deleterious in pregnant women and infants as this may cause irreversible damage to their physical and mental development.

A hookworm infection can cause iron-deficiency anemia, the condition where the body does not have an adequate number of healthy red blood cells. It can also cause nutritional deficiency and severe protein loss.

While natural and herbal remedies in treating hookworm infections have gained ground, proper sanitation and hygiene remain to be one of the most effective measures in preventing it. In particular, these recommended food items have gained popularity, thanks to its proven qualities.

Treatment and management options for a hookworm infection

Hookworm infections in humans are caused by either N. americanus (New World hookworm) or A. duodenale (Old World hookworm). The eggs are found in the stool of an infected host; the larvae are born and live in the soil. After 10 days of development, they can penetrate the skin and infect humans. Risk factors for infections include poor sanitation and hygiene.

In a classic hookworm infection, the symptoms appear a week or two after larvae exposure, and anemia marks later stages of the condition. Hookworm infections are particularly deleterious in pregnant women and infants as this may cause irreversible damage to their physical and mental development.

Proper sanitation and hygiene remain to be one of the most effective measures in preventing a hookworm infection.