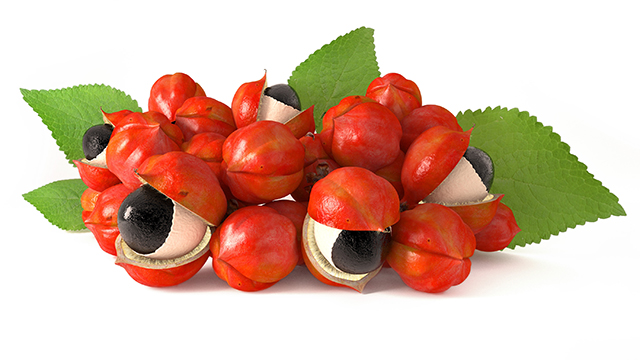 The guarana (Paullinia cupana) is a creeping shrub that thrives in the Amazon rainforest. The name “guarana” comes from the Tupi-Guarani word “wara’ná” which means “fruit like the eyes of the people”, a reference to the seeds having an eyeball-like appearance. Guarana has been used by native South American tribes since ancient times to treat physical ailments ranging from diarrhea to fever to dysentery. Today, guarana is recognized as a highly effective energy booster, owing to the fact that this plant is thought to have the highest natural concentration of caffeine. 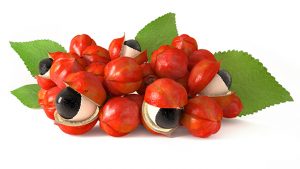 The caffeine from guarana is called “guaranine”, and it’s this substance that that has made the plant more popular outside of its native country. Apart from boosting energy, guaranine also enhances metabolism and aids in weight loss.

From bloating to diarrhea to dyspepsia, guarana has been used in the treatment of all types of digestive problems. Besides these conditions, guarana can be useful in the prevention or control of:

The primary benefit of guarana is the stimulant effect it has on the central nervous system. Consuming guarana has been shown to help with sharper focus, improved blood circulation, and greater adrenaline production. Guarana has become a favorite among professional athletes specifically because of this. However, since guarana have diuretic effects, this can cause dehydration during a workout.

In addition to encouraging metabolism, guarana’s other contributions to weight loss are its ability to suppress appetite and to induce lipolysis, or the process of fat breakdown to generate energy.

Guarana has been used as an herbal pain reliever, owing to its analgesic, neurasthenic, and nervine characteristics. Menstruating women can take guarana to help them deal with painful menstrual cycles. Another benefit guarana has for menstruating women is its energy-boosting capabilities, which can help those who feel worn out by their menses.

Because of its guaranine and catechins, guarana can serve as a natural blood-thinning agent and prevent the formation of blood clots.

The tannins in guaranine help facilitate peristalsis, the process that moves food through the digestive system. This leads to a healthier digestive tract since a lack of food blockage means a lower risk of constipation or diarrhea.

The side effects of taking too many caffeinated products – insomnia, anxiety, headaches, high blood pressure, and heart palpitations – are to be expected with guarana. Pregnant or breastfeeding mothers and people suffering from high blood pressure and cardiac problems are cautioned against consuming guarana.

Ways to use guarana

Although there are guarana capsules on the market, it’s still best to opt for the fruits to enjoy their full nourishing effects. The traditional way of taking guarana is to drink a cup of fresh guarana seeds thrice a day. Guarana can be consumed as a juice, a smoothie, or coffee.

Guarana does wonders for the digestive and cardiovascular systems.