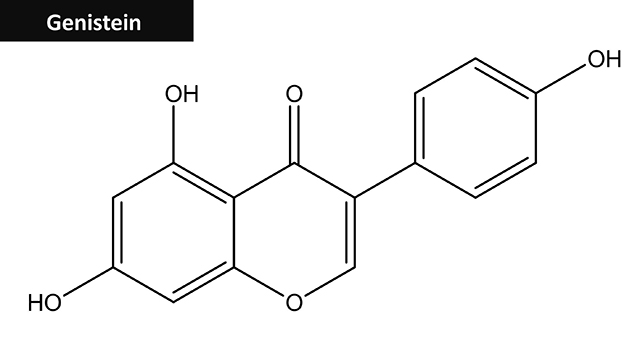 Genistein is a naturally occurring chemical compound that has been classified as an isoflavone. Its name is a reference to the flowering plant from which it was originally derived from, the dyer’s broom or Genista tinctoria.

As an isoflavone, this also makes genistein a phytoestrogen, or an estrogen-like compound found in plants. There are numerous isoflavones yet genistein is purportedly the one with the strongest estrogenic activity. This, combined with its numerous other medicinal properties, has raised interest in the health-promoting potential of genistein.

While there are numerous sources for genistein, fava beans, soybeans, and kudzu are the primary sources of this beneficial compound. In general, soybeans are especially dense with genistein, and soybean products such as tofu and soy milk are reliable sources of genistein. Dietary supplements of genistein are purchasable though these have been known to cause gastrointestinal issues. 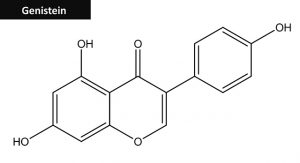 Because genistein copies the effects of estrogen on the body, it can be useful against conditions that result from or are made worse by declining estrogen levels. These include osteoporosis, breast cancer, ovarian cancer, and even endometrium cancer. Genistein can assuage the more painful symptoms of menopause as well, most notably the frequency of hot flashes.

Isoflavones in general have been associated with added protection against different varieties of cancer, and genistein is no exception. As was mentioned previously, genistein can protect against breast and ovarian cancer, specifically by binding with estrogen receptors and inhibiting estrogen from triggering cancer growth. Genistein has been shown to reduce the risk of cancer as a whole, however, by depriving cancer cells of the protein tyrosine protein kinase and essentially starving them of their energy source.

Genistein is a powerful antioxidant that can prevent lipid peroxidation, and at the same time boost the activity of other antioxidants like glutathione reductase and glutathione peroxidase.

By reducing keratin production, genistein can provide relief from psoriasis, a skin condition that can develop from abnormal skin cell growth.

Genistein benefits the heart greatly by reducing fatty acid oxidation and preventing cholesterol synthesis and esterification. All of these effects support the heart and lower the risk of cardiovascular diseases such as heart attacks, arteriosclerosis, and hypertension.

Since genistein is a phytoestrogen, it can lower the chances of developing diseases that would result from lowered estrogen levels, like osteoporosis and ovarian cancer; moreover, genistein can lessen the effects of postmenopausal symptoms. Genistein can protect the heart and the skin too.