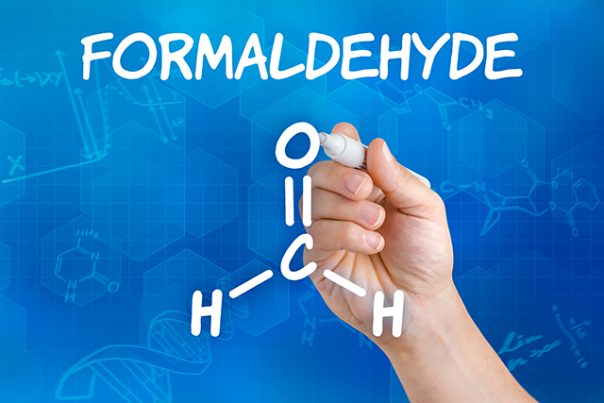 Formaldehyde is an extremely reactive aldehyde gas that is the product of oxidation or incomplete combustion of hydrocarbons. It is a gas at room temperature, readily soluble in water, and is most commonly sold as a 37 percent solution in water.

Formaldehyde finds uses in a number of ways, such as in the manufacture of resins and textiles, as a disinfectant, a corrotion inhibitor, a paint and coating additive, as fuel and a fuel additive, as an adhesive or sealant, and as a laboratory preservative, usually by using the formaldehyde solution (formalin), which is recognized as a hazardous compound for its toxic vapors.

It can be used to make other chemicals, fertilizers, and plastics. It also serves as an analytical reagent in concrete and plaster additives, cosmetics, photography, wood preservation, and fumigants.

Formalin, which is a colorless liquid that has an irritating scent, contains 47 to 50 percent formaldehyde by mass and some amounts of methanol added to hinder precipitation of formaldehyde polymers [formaldehyde is contained in solutions such as CH2(OH)2 and its polymers HO(CH2O)xH where x averages about three].

Formaldehyde can be found in smoke that is present in fires, in the atmosphere, in automobile exhaust, and in cigarettes. Small amounts of the compound are produced in humans during metabolic processes, especially during the metabolism of choline, glycine, methionine, serine, and also by the demethylation of O-, N-, and S-methyl compounds.

Pure formaldehyde is prone to exploding because it tends to polymerize exothermally at temperatures lower than 80 to 100 degrees Celsius (176 to 212 Fahrenheit). Polar impurities such as acids, alkalies, and water contribute to the fast acceleration of polymerization.

To be specific, formaldehyde is excreted into the air as carbon dioxide, as formic acid in the urine, or as one of the many breakdown products from one carbon-pool metabolism. 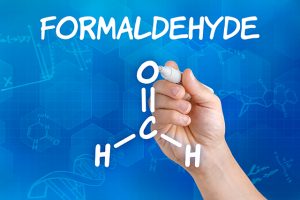 Harmful effects that can be caused by formaldehyde

Formaldehyde induces extreme histamine release, thus increasing the chances that a person will succumb to allergic symptoms. This is not surprising as formaldehyde is classified as an allergen. As such, it is confirmed as a skin and eye irritant.

Because formaldehyde resins are used in many construction materials, such as plywood, carpet, and spray-on insulating foams, it can be considered as an indoor air pollutant which causes irritation to the eyes and mucous membranes, leading to a burning sensation in the throat, difficulty breathing, headaches, and watery eyes.

Formaldehyde has cancer-causing elements, as confirmed by the United States Environmental Protection Agency. It can enter the bloodstream and can cause systemic toxicity in remote tissues such as the bone marrow.

High concentrations of formaldehyde cause tissue damage and acidosis, or the overproduction of acid in the blood, an excessive loss of bicarbonate from the blood, or carbon dioxide buildup in the blood.

Formaldehyde is bad for the skin. It can cause contact dermatitis, which is characterized by extremely itchy skin.

Formaldehyde is bad for the respiratory system. It can very well be a direct cause of lung cancer and nasal squamous cell cancer. It changes the patterns of micro ribonucleic acid (miRNAs) that regulate gene expression, potentially leading to the initiation of a whole plethora of diseases. It can also trigger asthma symptoms at exposures of approximately three parts per milion (ppm).

Formaldehyde is bad for the ocular system as it can cause extreme eye damage and corneal opacification leading to blindness.

Formaldehyde is bad for the female reproductive system. It can cause interruptions in menstrual flow and can induce sterility in women.

Formaldehyde is bad for the digestive system. It can result in gastrointestinal problems that if not addressed quickly can even result in death.

Formaldehyde is bad for the endocrine system.

Formaldehyde is bad for the skin.