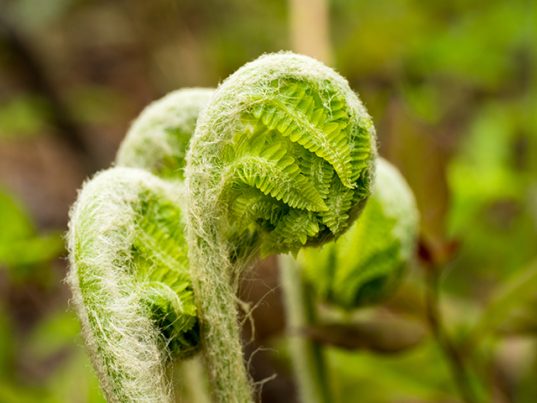 Fiddleheads, also known as fiddlehead greens, are the tightly curled fronds of young ferns, most often ostrich ferns (Matteuccia struthioreris). The name refers to their furled appearance that resembles the head of a fiddle or violin. Fiddleheads are harvested and consumed as vegetables, particularly in North America. They’re especially popular in Maine and New Brunswick in the United States and Canada, respectively, and have been incorporated into the diets of people in New Zealand and Australia. Fiddleheads are surprisingly nutrient-dense plants that can yield numerous health benefits when consumed frequently. 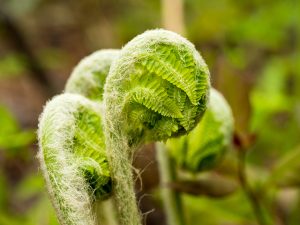 At just 34 calories per a 100-gram serving, fiddleheads are low-calorie vegetables with an impressive nutritional profile that includes a bounty of essential vitamins and minerals, such as:

Fiddleheads are loaded with copper, manganese, and vitamins A and B3, and can easily help meet the recommended daily intake for these nutrients.

Fiddleheads can reduce the symptoms of various health conditions, such as:

The abundance of vitamin A in fiddleheads makes them an excellent food choice for maintaining good eyesight and for preventing illnesses that arise from weakened vision, namely macular degeneration and night blindness.

As a rich source of manganese, fiddleheads can lower the risk of osteoporosis as well. Manganese assists in the formation of bone regulatory hormones and bone metabolism enzymes. In addition, manganese works hand-in-hand with the minerals calcium, zinc, and copper in strengthening the bones and making them less prone to breakage and loss.

The iron content in fiddleheads contribute to them being a decent preventive measure against anemia, which arises from iron deficiency.

Fiddleheads have a fair amount of potassium and almost no sodium, meaning they can help against high blood pressure. Potassium is a vasodilation mediator, and so it ensures that blood vessels dilate properly.

Fiddleheads are believed to be good for a number of the body’s systems and organs, most notably:

Ways to use fiddleheads

Fiddleheads have a unique and natural grassy flavor that can be brought out by sauteing, steaming, stir frying, baking, and frying. They do well as a major component of most vegetable-heavy recipes, or as a side dish. Their flavor makes it so that a bit of salt and pepper will often suffice as seasoning. Take care not to overcook fiddleheads, as overcooking will make them too soft.

Note: uncooked fiddleheads taste very bitter and shouldn’t be consumed raw, not just because of their bitter flavor but also because raw fiddleheads may upset the stomach. Fiddleheads that haven’t been cooked or stored properly can cause food poisoning.

Fiddleheads contain a diverse range of nutrients that make them truly healthy vegetables. They can reduce the risks of macular degeneration, anemia, high blood pressure, and osteoporosis. They can support vision, heart, and bones. Raw fiddleheads, as well as fiddleheads that have not been properly cooked, can have harmful health effects.