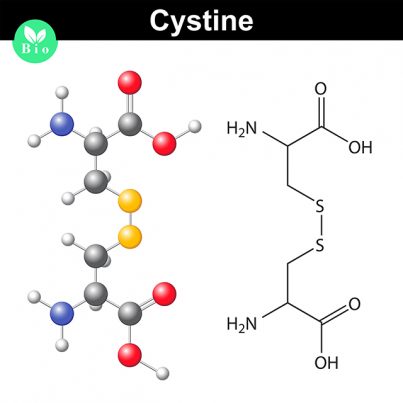 Cystine is a sulfur-containing amino acid counted as one of the 22 amino acids involved in the formation of plant and animal proteins. This compound was identified in 1812 by English physicist and chemist William Hyde Wollaston. Cystine is considered to be a dimeric amino acid due to being derived from the oxidation of two cysteines. While very similar to cysteine, there are key differences that set the two amino acids apart: for one, cystine is more stable than cysteine, although cysteine is more easily absorbed. Additionally, cystine is involved in protein synthesis and is needed to metabolize vitamin B6 or pyridoxine, while cysteine is more closely associated with glutathione synthesis.

While an important amino acid, excessive amounts of cystine can lead to health problems like cystinosis, a disease especially prevalent in young children. This genetic disorder results in the formation of cystine crystals in cellular tissues, such as kidney or bladder stones.

To help the body better absorb cystine, taking foods or supplements dense with vitamin C is recommended. The vitamins B6, B9 or folate, and B12 or cobalamin will help the body make use of the cystine it accumulates. 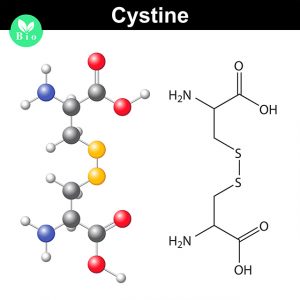 Both cystine and cysteine are involved in the production of the natural antioxidant glutathione, itself known for protecting the liver against toxins absorbed from cigarettes and alcohol. Through this, cystine is able to prevent liver damage. Glutathione has also been found to reduce inflammation.

As a result of the anti-inflammatory effects of glutathione, cystine is believed to provide relief from arthritis.

Cystine is most closely linked with the skin and hair as it can be found in alpha-keratin, the protein needed for these parts of the body. In fact, cystine deficiency will often manifest in slowed-down skin and hair growth, and it’s believed that cystine can serve as an anti-aging ingredient for connective tissues, skin, hair, and even bones. Moreover, cystine-rich supplements have been found to assist in rebuilding hair and skin tissue, as well as hasten the healing process of wounds and burns. As a result, cystine is often added to hair care products, facial moisturizers, and anti-aging skin treatments.

Cystine can protect the liver from toxin damage and help alleviate the pains of arthritis. This amino acid can support the health of the skin, hair, nails, bones, and connective tissues. Too much cystine can result in bladder or kidney stones, however, while a deficiency of cystine will often show through brittle hair and nails.