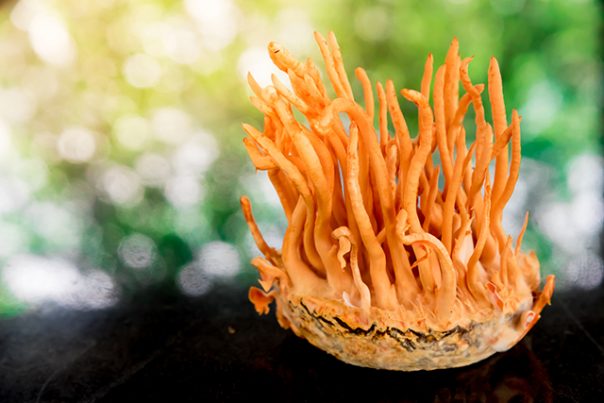 Cordyceps are caterpillar fungi that are normally mistaken as mushrooms. Withholding the initial disgust you had when you read that, cordyceps are one of most amazing plants you’ll find in this nutritional compendium.

They are an aggressive species — parasitic, to be in fact — and attack moth caterpillars with spores. The insect is defenseless and succumbs to the terror, allowing the cordyceps to envelop them with painful microorganisms as the caterpillar slowly dies in asphyxiation. This lasts the entire winter (cordyceps attack around autumn). When spring comes, the fungi have completely mummified the caterpillar and sprout a long, slender fruiting body.

The product of such an astounding battle is what traditional healers use to promote overall well-being and health. 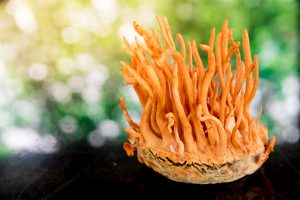 Out of the ashes of death comes an herb that is meant to give vitality — at least to your sex life. Interestingly enough, cordyceps are prescribed by traditional healers to treat sexual dysfunction in both men and women. The mushroom is taken as a general sexual tonic and is said to enhance libido as well as improve performance. For women, regular consumption of the mushroom can stimulate vaginal fluid production, which makes intercourse less painful and more pleasurable. Men, on the other hand, are able to sustain their erections longer.

Other botanical reviews point to cordyceps’ function in fighting off the negative effects associated with excess stress and fatigue. Supposedly, the nutrients in the mushroom fight off free radicals and lessen oxidative damage.

There is also evidence to suggest that cordyceps prevent conditions linked to inflammation. Few studies have even verified cordyceps’ function in cancer prevention and treatment, although the scientists who conducted these research qualified for more data.

Other uses for the fungus include:

Cordyceps play a useful role in both the male and female reproductive systems. The mushroom has additionally been observed to be crucial in digestive health, helping the kidneys and the bladder maintain proper function.

Ways to use cordyceps

Cordyceps have a mild, mushroom-like flavor and can be used as an alternative to dishes that need a slightly “earthy” flavor and texture. Most local health stores sell the mushroom dried, so try opting for dishes that would need something a little more crunchy. One such recipe involves using the mushroom in a chicken soup.

There are cordyceps tablets available in specialty stores, but these are normally expensive.

Cordyceps are fungus that are used to improve libido, but also serve as great cancer-preventive and immune-boosting agents.