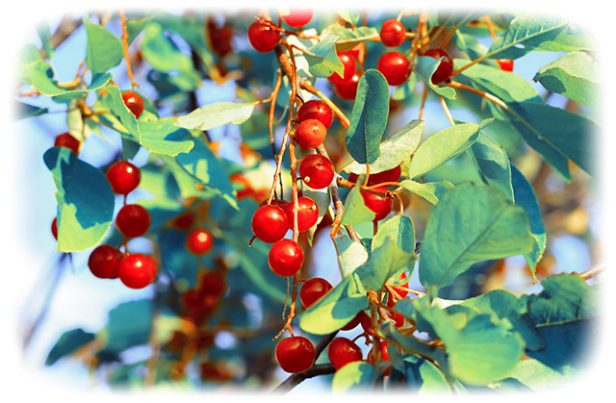 The chokecherry (Prunus virginiana) is a small, flowering tree native to North America. The small, succulent berries range from red to purplish-black in color. Wild chokecherries are typically considered pests due to tent caterpillars making the trees their homes. Despite their status as pests, chokecherries are an important plant to many Native American tribes, who value the fruits as natural treatments for fevers and colds, as well as staple foods during the winter months. 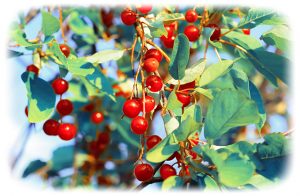 Chokecherries contain a variety of nutrients, most notably:

The deep colors of chokecherries can be attributed to their concentration of antioxidant anthocyanins. These flavonoids are naturally occurring compounds in many fruits and vegetables, and have become known for their protective qualities. They keep harmful free radicals away from the heart, liver, and other parts of the body. It’s believed that higher amounts of anthocyanins result in a darker color in fruits and vegetables.

Apart from anthocyanins, chokecherries are abundant in another antioxidant, vitamin C. When working in conjunction with anthocyanins, vitamin C greatly strengthens the immune system.

The nutritional, healing properties of chokecherries are such that native people have relied upon these versatile plants to remedy all kinds of conditions. These range from stomach ache and sore eyes to liver problems. Fevers, colds, and coughs are treated with chokecherry infusion, while chokecherry tea is used to relieve diarrhea and anxiety. The fruits are considered to be average anti-bacterial and anti-viral agents.

Chokecherry roots and barks are used as well. Traditionally, the roots and inner bark serve as remedies for dysentery, bleeding during pregnancy, and painful menstrual cycles. Modern herbalists believe these parts of the plant to be excellent appetite stimulants, blood tonics, and astringents. The inner bark is believed to be especially useful, as it can serve as a treatment for wounds, while a decoction of the inner bark can relieve the pains of laryngitis.

As reliable sources of anthocyanins and vitamin C, the fruits of the chokecherry are good for the body overall, most notably the immune system. The manganese content plays a role in keeping the body healthy as well. Manganese is a mineral needed by the nerves and thyroid glands to continue functioning properly, while the bones need manganese to stay strong.

Ways to use chokecherries

Chokecherry can be made into jelly, syrups, and jams, added to stews, or baked into pies. The extract is notable as a flavoring agent for liquors and spirits. Chokecherry wine, in particular, has been described as tasting similar to wine made from grapes.

The taste can be overwhelming to some, but drying chokecherries will mellow it out considerably.

Chokecherries are plants highly prized by Native American tribes for their medicinal and culinary applications. The fruits, bark, and roots have been utilized as natural remedies for coughs, colds, fevers, and diarrhea. Their notable anthocyanin and vitamin C content makes them beneficial to overall health, as they protect the body from free radicals.