Autism – causes, side effects and treatments at NaturalPedia.com Autism is a neurological and developmental disorder that starts early in childhood and persists throughout a person’s lifetime. People who suffer from autism have issues regarding non-verbal communication, social interactions, and activities that require spontaneity, like play and banter.

Autism is also linked to ailments such as mental retardation and certain medical conditions, which can range from mild to severe. Mildly affected people may seem very normal while severely afflicted people have intellectual debilitations and may be rendered unable to function in any kind of social setting.

According to the Diagnosis and Statistical Manual of Mental Disorders, autism is characterized by impairment in behavior, social interaction and communication.

It’s important to quash some myths about autism. It’s not true that people with autism have no feelings – they certainly do, but may not be wholly able to control them, and therefore may do extreme things when triggered by them.

Autism’s causes are yet to be known, but scientists surmise that genes and environmental factors come into play. In earlier years, however, autism is considered a biologically-based disorder. It was suggested in the olden days that autism is brought about by poor attachment skills on the part of the mother, an observation which brings about a great deal of unnecessary pain – in reality, it’s not other people’s inability to connect to the patient, but the patient’s inability to interact properly, that is the problem.

Some risk factors for autism include advanced age of the mother at the time of the child’s birth, maternal prenatal medication use, maternal bleeding, and gestational diabetes. Autism is also purportedly caused by existing neurological disorders, such as: 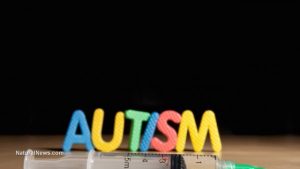 Known side effects of autism

Autistic people don’t feel empathy towards other people. Sometimes, with frequent practice, empathy can improve. However, it may never come as naturally to a person with autism as it does to a person who isn’t suffering from the affliction.

Autistic people can indulge in repetitive behavior. A child with autism can be observed jumping from one end of the room to the other and doing the same thing over and over again for one, five, or 10 minutes – even longer. Another child may be seen drawing the same picture again and again.

A child with autism may show little or no interest in activities that his peers find delightful. Autistic children also don’t seek social interactions. In extreme cases, they might not be aware of the presence of other people in their surroundings.

People with high-functioning autism might have an understanding of simple speech but may be clueless as to the context in which they are used in conversations. Teens and adults with autism may opt to create friendships with people who are much younger than them, for this is the age group in which they could relate to.

Autism is strongly associated with seizures. One misunderstood association between autism and seizures is the Landau-Kleffner syndrome, which is also called “required epileptic aphasia” and is characterized by a sudden loss of language skills. A child with Landau-Kleffner syndrome loses speech skills at the age of four, whereas autistic children lose theirs at a younger age.

Since autism disrupts a child’s learning capability, it can be said that the disease is bad for the nervous system.

Food items or nutrients that may prevent autism

Dietary supplements, such as those for omega-3 fatty acids, can be given to people with autism.

One treatment approach that can be used for autism is the Son-Rise program, a vocational program that caters to an individual developmental level of functioning. In this method, a stimulus-response approach is used: Each piece of information is taught and allowed to be mastered by the patient before another idea can be presented.

For people with autism whose symptoms include self-harming behavior, instead of punishing them, a system of rewards and encouragement is given for appropriate behavior.

A child with autism may show little or no interest in activities that his peers find delightful.

Autism may be bad for the nervous system, as it disrupts a child’s learning potential.

Dietary supplements, such as those for omega-3 fatty acids, can be given to people with autism.