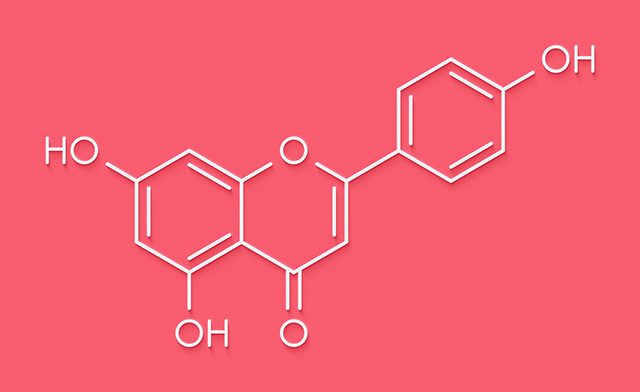 Apigenin, also known as 4′, 5, 7, -trihydroxyflavone, is a phytochemical that naturally occurs in a variety of fruits and vegetables. Outside of its use in dyeing wool, this substance is more widely recognized as a bioflavonoid compound, specifically a flavone. This is because apigenin has a variety of health-promoting characteristics, the most notable of which is its ability to combat the negative effects of carcinogens.

The best way to obtain apigenin is by consuming fruits and vegetables. Some rich sources of apigenin include celery, parsley, grapes, and cherries. Wines and chamomile tea are noteworthy apigenin sources as well. Though apigenin supplements can be purchased from health stores, natural sources remain the ideal due to the abundance of chemical constituents that complement the prowess of apigenin. This is especially important since apigenin is known to possess poor bioavailability. Eating spices in conjunction with the apigenin-rich foods is one method of increasing the bioavailability of this nutrient.

Apigenin is a largely beneficial compound, but it can have negative effects. Individuals who are on hormone replacement medicine should avoid apigenin since it changes the levels of estrogen in the body and can interact with these medications to increase the risk of breast cancer. 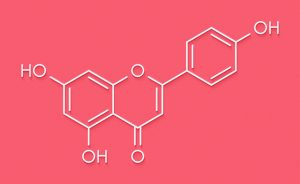 The most notable health benefit of apigenin lies in anti-tumor and antioxidant capabilities. By obstructing and inhibiting the advancement of cancer cells, apigenin can greatly reduce the likelihood of these cells becoming tumors. Apigenin is equally known for being an antioxidant, meaning that it can prevent radicals from damaging cells and lessen the chances of these cells becoming cancerous in the first place.

Apigenin has been shown to decrease inflammation through a variety of ways. One is by suppressing the responses of pro-inflammatory gene and increasing the anti-inflammatory expression of cells in the immune system.

Individuals suffering from elevated sugar levels can turn to apigenin to have these reduced. It’s believed that apigenin does this by changing the amount of glucose transported, in turn changing the rate of which sugar is being metabolized in blood.

High levels of the stress hormone cortisol have been linked to high blood pressure, negative mood, and poor sleep. Apigenin prevents this from occurring by inhibiting the function of certain cortisol-producing enzymes. Due to this, however, excessive and prolonged intake of apigenin can lead to sedation and numbness, making it crucial to take in just the right amount of this flavonoid.

Apigenin is known the lessen the likelihood of developing certain types of cancer, particularly those concerning the breasts, prostate, bladder, and stomach, making this flavonoid one of the best nutrients for supporting the health of these body parts albeit in a more unorthodox manner.

Thanks to the variety of medicinal properties, apigenin can boost the function of the immune system and decrease the body’s susceptibility to disease.

Apigenin can benefit the skeletal system as well by accelerating the healing process of bone tissues.

One specific sub-type of apigenin, apigenin glucopyranoside, is believed to have neuroprotective effects that make it helpful in protecting the brain.

Topical applications of apigenin can be used to improve the appearance of skin by increasing its permeability and by healing skin conditions such as dermatitis, likely a result of its anti-inflammatory attributes.

The flavonoid apigenin is a substance that has been linked to a decreased risk of many types of cancer, high blood pressure, elevated cortisol levels, and dermatitis. This helpful nutrient has been shown to support the health and function of the skin, heart, brain, and bones too.