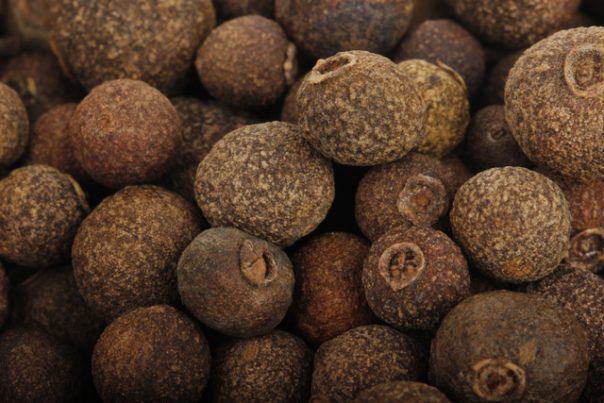 Made from the dried pimento fruit, allspice is also known as “pimenta” and “Jamaica pepper” because of its pepper-like appearance. Allspice gets its name from the smell and taste, which has been described as a mixture of  juniper berries, black pepper, cloves, nutmeg, and cinnamon. Though a staple in Caribbean cuisine, allspice has since been adopted and used by a multitude of cultures across the world. The depth of flavor allspice can bring to any dish and its impressive health benefits have contributed to it becoming a popular spice outside of its native Central America. 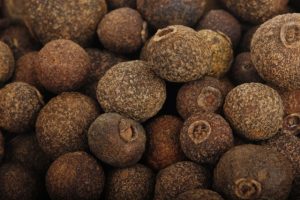 Allspice has an ample collection of chemicals that do more than give it its distinct aroma and flavor. This concentration of chemicals also give allspice a spectrum of beneficial properties that include anti-inflammatory, antiseptic, and even anesthetic properties. Of particular note are:

Apart from these, allspice is also composed of other helpful vitamins and nutrients.

Eugenol, a chemical compound that inhibits spoilage in cloves, is effective in preventing digestive issues like diarrhea, constipation, and excessive flatulence. Eugenol has other uses: the antimicrobial, antibacterial, and antiseptic qualities present in this compound have made allspice a favorite among dentists. Allspice has been used in gum and dental treatments, and can even promote overall better dental health by protecting the teeth and gums from bacterial pathogens.

Other chemical compounds like quercetin and tannins act as antioxidants. The presence of vitamin C and vitamin A also add to the free radical-neutralizing aspect of allspice.

Renowned for its anti-inflammatory qualities, allspice is ideal for relieving and even reducing pain in several parts of the body. Aside from this, allspice can also be used for:

The antioxidants and nutrients in allspice allow it boost:

Ways to use allspice

Ground allspice can be bought at most grocery stores, but purchasing allspice corns is preferable. Not only does ground allspice often contain adulterated spicy powders, but it’s believed that the medicinally-vital compounds are accumulated in the outer coating of allspice corn. As a seasoning, allspice can be added to any meal or dish, such as chili, soup, pork chops, breads and even certain liquors.

Essential oil can also be extracted from allspice to work as a rubefacient, or a substance that irritates skin and expands blood vessels to increase blood flow. Allspice essential oil is a common home remedy for bodily pains like arthritis or sore muscles, and is often rubbed directly onto skin or used with hot baths.

As an anti-inflammatory, allspice is especially useful in soothing the stomach and promoting healthy digestion.

In addition to the antibacterial effects, allspice also has anti-fungal characteristics. When added to certain foods, allspice can subdue bacteria before it even enters the human body.

Allspice is also efficient in inhibiting the growth of stomach bacteria like E. coli and keep the gastrointestinal system functioning properly.

Hypersensitive individuals are cautioned against allspice. Gastric ulcers can become exacerbated by allspice, and excessive allspice consumption can cause gastrointestinal irritation.